I would like a dark mode, the site is very brigth and my eyes get tired fast. I have dark mode on my browser but doesnt seem to affect the site.

If you know some trick to solve, its also welcome.

V.I.P Member
My normal trick is to turn the monitor brightness right down. Sometimes this is done within the operating system others the monitor has dedicated controls for it.

Might take a little digging/experimentation to get this set right.

Would be nice. There are extensions one can use with the browser. But they are not the best, and they tend to turn sites/ forums already set on dark mode back to white or just not do anything at all.

Thanks! A big help!

V.I.P Member
Thank you! Does it work for android?

V.I.P Member
You can put dark mode on Chrome on Android:

I believe if that doesn't work, there are ways to install app extensions for Chrome on Android.

Raggamuffin said:
You can put dark mode on Chrome on Android:

I believe if that doesn't work, there are ways to install app extensions for Chrome on Android.

Yes, I already have the dark theme but this forum is inmune to it.

I will do some search on the extensions thing. Thanks.

V.I.P Member
Unfortunately dark mode isn't too pleasant with this site using Firefox in Linux. Sure, you can make the background dark, but you get a bunch of unsightly lines, borders and weird white boxes that don't show up in the light version. While I have nominal control over the fonts, background colors and links, the rest is a bit of a mess. Though yes, it's still easier on the eyes... 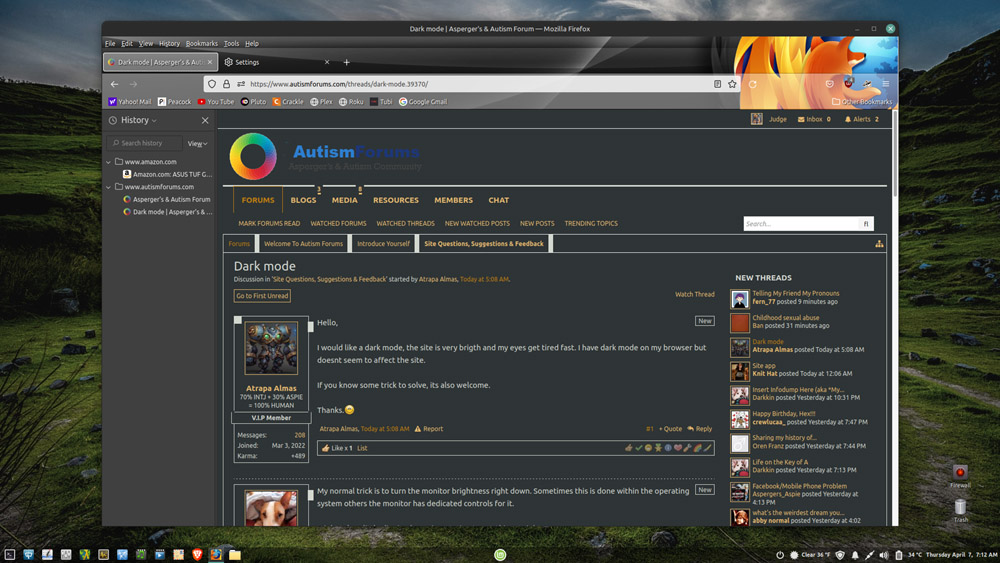 If I could figure out a way to make all these boxes and borders disappear, it would look quite nice.

On a sidenote I know presently Windows 11 tends to fall on its face in dark mode, as it seems only a portion of the OS is capable of it. Where the rest are left with a conventional white background and dark text.
Last edited: Apr 7, 2022

V.I.P Member
Wow! Looks great to me. I can see the borders you mention.

I will try it later from my laptop, I use my cellphone 90% of time.

Thank you for testing and sharing your screen shot.

V.I.P Member
I also use the "Brave" browser in both Windows and Linux in dark mode, but it doesn't appear to allow a user to alter individual website color schemes at all. Brave uses the Chrome engine and extensions, but I haven't checked to see if they have something that would fix this issue.

I guess now would be a good time to check it out....

It seems the overall consensus of so many software developers to go to dark mode. Makes sense if you've ever worked in or seen such people at work, where most if not all lights are off.

V.I.P Member
I have read recomendations of using kiwi browser, but that is a big change for me. So I will just keep lowering the screen brigthness.

Atrapa Almas said:
Wow! Looks great to me. I can see the borders you mention.

I will try it later from my laptop, I use my cellphone 90% of time.

Thank you for testing and sharing your screen shot.
Click to expand...

I'll have to take a long look at all the other websites I routinely visit in Firefox to see if they have similar issues. Yeah, it's worth checking your monitor as well to lower the contrast/brightness settings which are often set too high on default.

So far looking at other websites they all have the same attributes of excessive borders, etc. using Firefox. Too bad, as I suspect Mozilla could fix such things if they really wanted to. Probably the vendor of this forum, Xenforo as well. Though there are also developers out there that fundamentally take offense at users being able to alter the colors of their websites. A position I once held as a former website designer.

And then there is the intention of Google to totally control such things and exclusively set any design standards given their present domination of the browser market. That it's "Google Chrome's way or the highway".

I'm fine with Brave's use of the Chrome engine but with suped-up privacy features that Google has no intention of ever using. I'll take privacy over dark mode for sure. In the meantime one of the simplest things to do is to consider reducing the contrast and brightness of one's monitor.
Last edited: Apr 7, 2022

V.I.P Member
I could be wrong, but it seems like maybe this is an issue related to XenForo?

Fino said:
I could be wrong, but it seems like maybe this is an issue related to XenForo?
Click to expand...

Looks like there are third-party add-ons for such things, but whether or not the host of this site would want to use or pay for them is anyone's guess.

The sort of thing that Xenforo is probably not taking any liability or responsibility for. Making some hosts a bit skittish for good reason given that such applications are not vetted.

Hello, could you share if you have some plans in the future to incorporate a dark mode to the forum?

Thank you in advance.

maycontainthunder said:
My normal trick is to turn the monitor brightness right down. Sometimes this is done within the operating system others the monitor has dedicated controls for it.
Click to expand...

dark mode is not healthier than normal mode. it´s just matter of taste. the brightness of my laptop and smartphone is low, but enough so I can read everything without any problems. I don´t get any eye problems or headache even when I would look into the screen the whole day. and I don´t use dark mode. but when I would turn on brightness more, I would get instantly headache and eye pain.

Be the change you want to see

Hello, could you share if you have some plans in the future to incorporate a dark mode to the forum?

Once the upgrade to XenForo 2 is complete, adding a dark mode is on my backlog.

V.I.P Member
Thank you so much!

V.I.P Member
I've gotten so I really like the browser extension "Dark Reader" to keep a dark background and light text consistent with every website I browse.

Though just recently I've discovered that entities like Microsoft (MSN) and Google News are now using programming to circumvent extensions like Dark Reader. So if I go to either site, I now get a rather unpleasant and sudden blast of brightness with a typical white background and black text. Certain US government websites seem to continue to have problems with the Dark Reader extension as well. Guessing they probably don't care.

As a former web developer, I can appreciate how a site owner wants their site intended as they see it. However as a typical web surfer, I detest that they have taken this power away from users. Just keeping it real.
You must log in or register to reply here.