What video game are you currently playing?

V.I.P Member
Battlefield 2, singeplayer : P because I have nothing better to play and I play very unregularly at all. but it makes fun to play from time to time, especially when you have to bypass some time.

Last weekend a friend and I finished We Were Here, so I bought us each the sequel We Were Here Too and we started that yesterday and are going to play more in a few minutes.

These are co-op games that really test your ability to communicate with your partner. You're each seeing different things and what you see will help them solve puzzles on their side so they can progress, and vice versa, so you have to describe everything you can to the other player and they have to do the same for you. My friend and I rarely use voice chat even though I'd usually feel comfortable using it with her because we've been playing online games together since 2005, but to play this you absolutely need a way to communicate with your partner, so we text while playing. It's not ideal, but it works good enough. I just figured that's worth mentioning if anyone reads that and thinks they wanna play, just know how important communication will be.

V.I.P Member
Played some Kingdom Hearts II Final Mix today. I have only played a bit of the game before. I still need to get the other collection and KH III for the Switch.

V.I.P Member
The new Age of Empires III Definitive Edition DLC. Malta is quickly becoming my new favorite civ, up there with China, Mexico, and Russia.

V.I.P Member
Amnesia The Dark Descent. It is a very scary game on Hard difficulty.

V.I.P Member
I completed this about ten minutes ago. 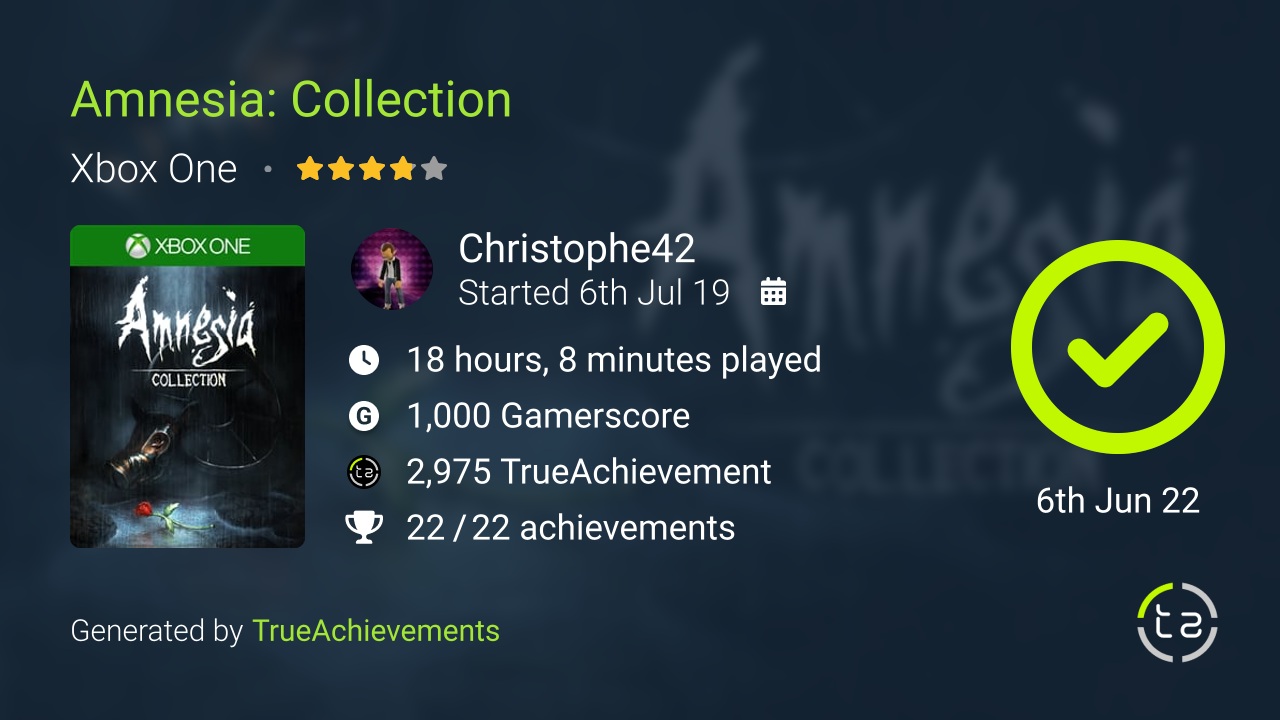 I recently signed up for Game Pass on the PC because they had a deal where you could get 3 months for $1 and that was too good to pass up. I played through the new TMNT game. It's great, it looks and feels just like the old arcade game and thanks to Game Pass I didn't have to spend $25 to play it. My only complaint is how short it was (roughly 3 hours), but I guess I understand that because of how repetitive these types of games can be.

I play a handful of turns of Civ 6 a day. I also started playing a game called Valheim but don't have much time for the latter or others.

Pavlov VR. It is incredible but the gore is very real so I do not think it is for people new to gaming.

I haven't have much motivation to play much of anything recently, but I've been getting back into the Sims 4 as a time waster.

Since Fall Guys became free-to-play I've been playing that again. In 2020 I was playing it on PlayStation 4 when it was one of the free games given to PS+ subscribers, but now that it's free on everything I've been playing it on Nintendo Switch. They've added a lot of new content since I last played, but I might end up going back to the PS4 version. As soon as I booted it up on Switch for the first time it was clear as day the sacrifices they had to make to get the game running on Switch (for example the character animations are really choppy). Not that I'm a graphics snob or anything, but if I already have access to the better version of a game, then why shouldn't I play it? Progress will carry over between the versions anyway. Switch version is still good enough if that's all you have access to though.
A

Yeah, i also like smash and played with my gf together

I've started playing Astro's Playroom on PS5 today. It comes with the console and is basically a short game (3-ish hours) whose purpose is to just show off what the new controller is capable of. Well now that I've seen what it's capable of, I'm impressed. I might start buying more multiplatform games on PS5 and less on PC and Nintendo Switch.

V.I.P Member
I haven't gamed in a really long time, but...

Considering getting back into Minecraft so I can program some turtles to help sharpen my Lua skills. The only part that sucks is having to grind away for redstone and diamond before I can get started with the scripting. Shouldn't I get a complimentary turtle to do all of that stupid crap for me? lol
A

i'm currently playing ghost of tsushima,along with Red Dead Redemption II.i also flip a coin to decide what i do in the game,based on who begs for mercy,along with what you can do called antagonizing .

The video games that I play are chess, DLS22 (Dream League Soccer 2022), Clash of Clans, and FIFA Mobile.

Now, I do not play GTA, but I do play Clash of Clans. The game is addicting, with lots of troops, exciting and thrilling attacks, Clan Wars, and fun ways to build your base/village.

From the developer's (Supercell) website: Clash of Clans × Supercell
Answer the call of the mustache! Join the international fray that is Clash of Clans. Customise your village, build an army and crush your opponents. Like using friendship to strike fear into your enemies? Join a Clan or establish a Clashing legacy by creating your own. The choice is yours in this millions-strong community of Barbarians. Download for free and Clash on, Chief!
You must log in or register to reply here.