Staff member
Admin
V.I.P Member
The "Horse" with the hood refitted so I can build a new exhaust for her: 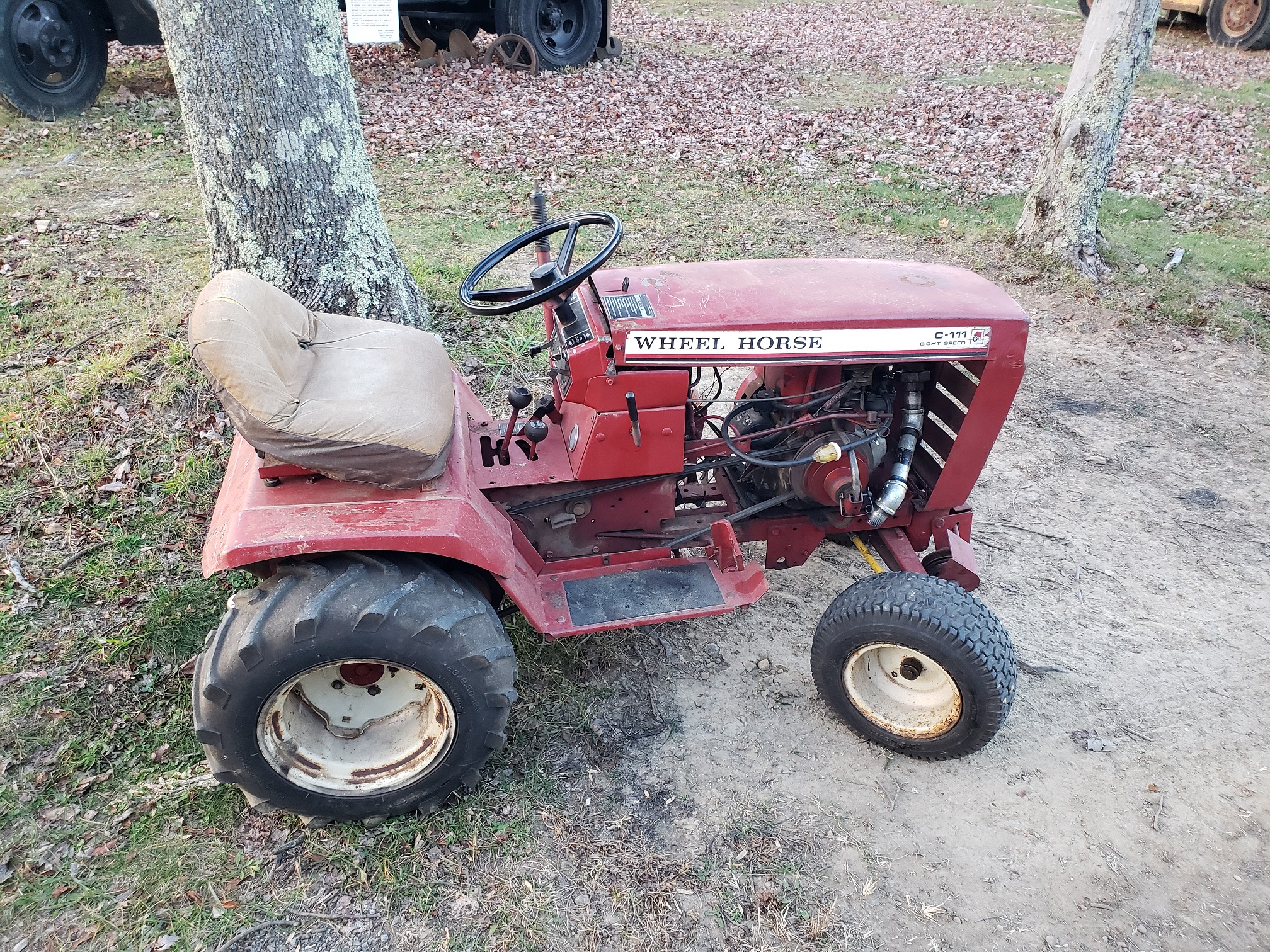 I added a union to it in order to be able to weld a mounting tab to it for additional support and to ease it's assembly.
The muffler can will be pointed towards the ground to help abate the noise.

The carb gasket was destroyed, so time to make a new one.
No gasket material?
Easy enough, a cardstock box will suffice.
Funny how the packing material for the machine holddown kit was able to provide: 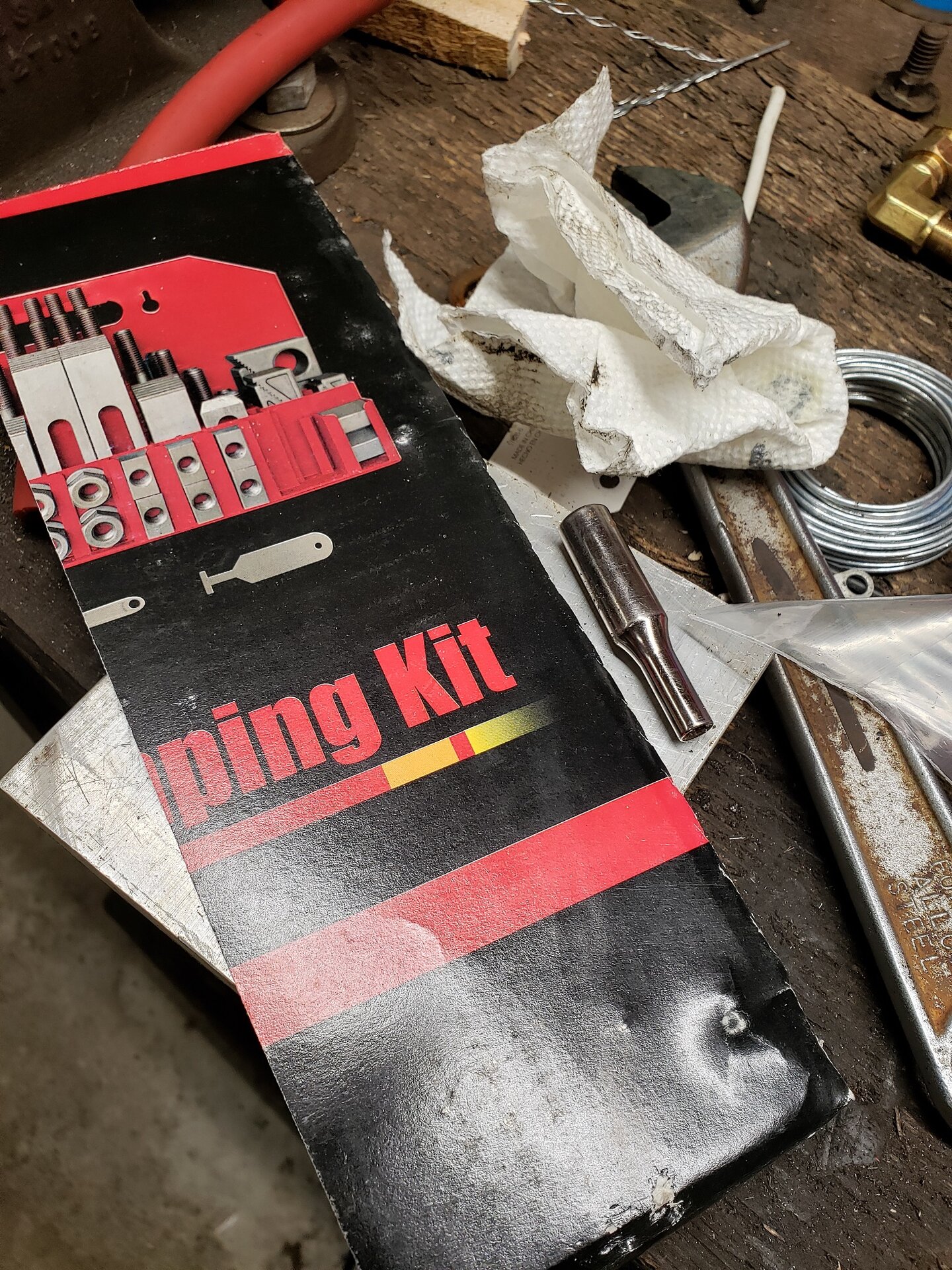 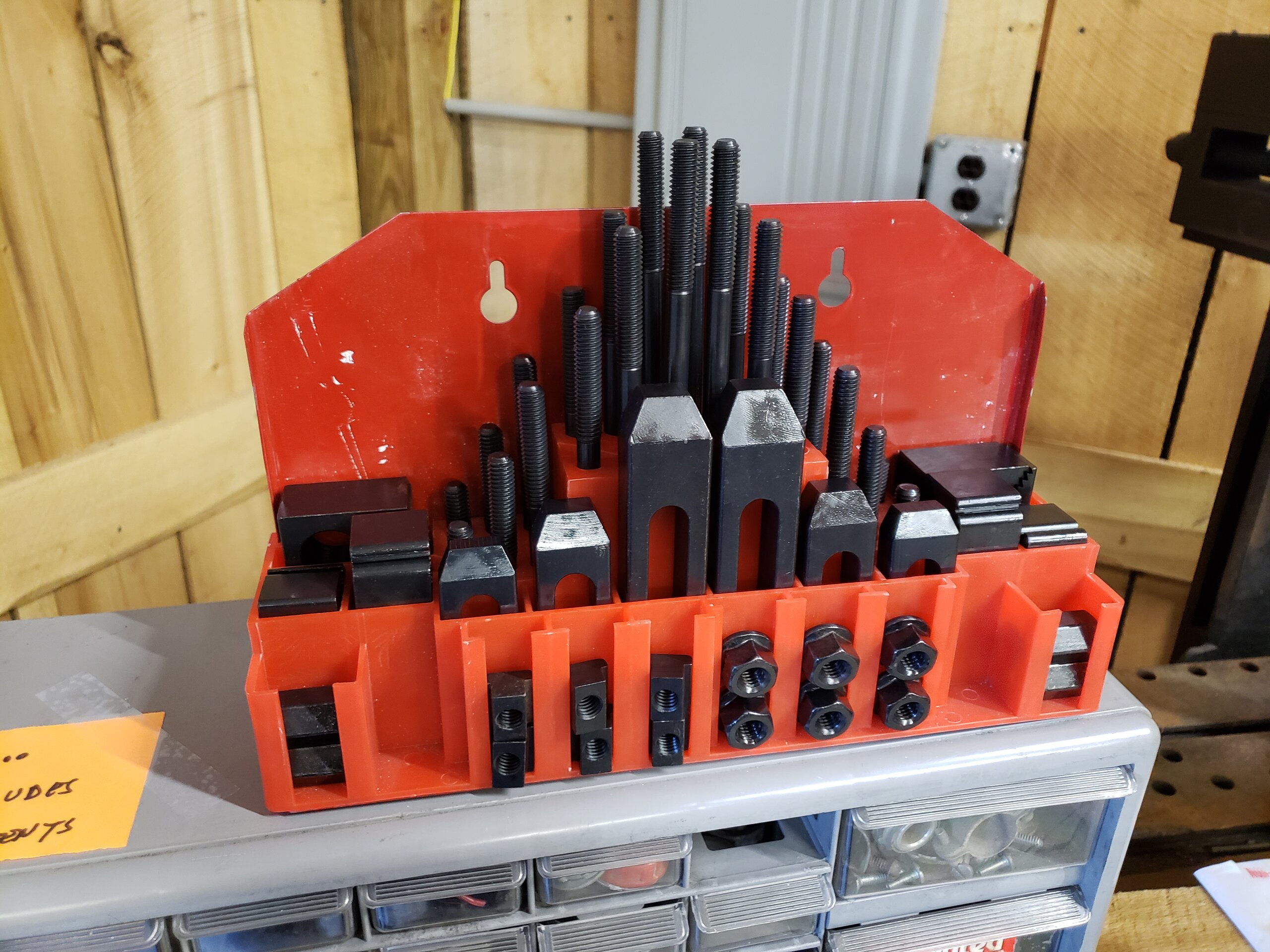 A 5mm deep well socket was used to punch the holes because it was the right size. 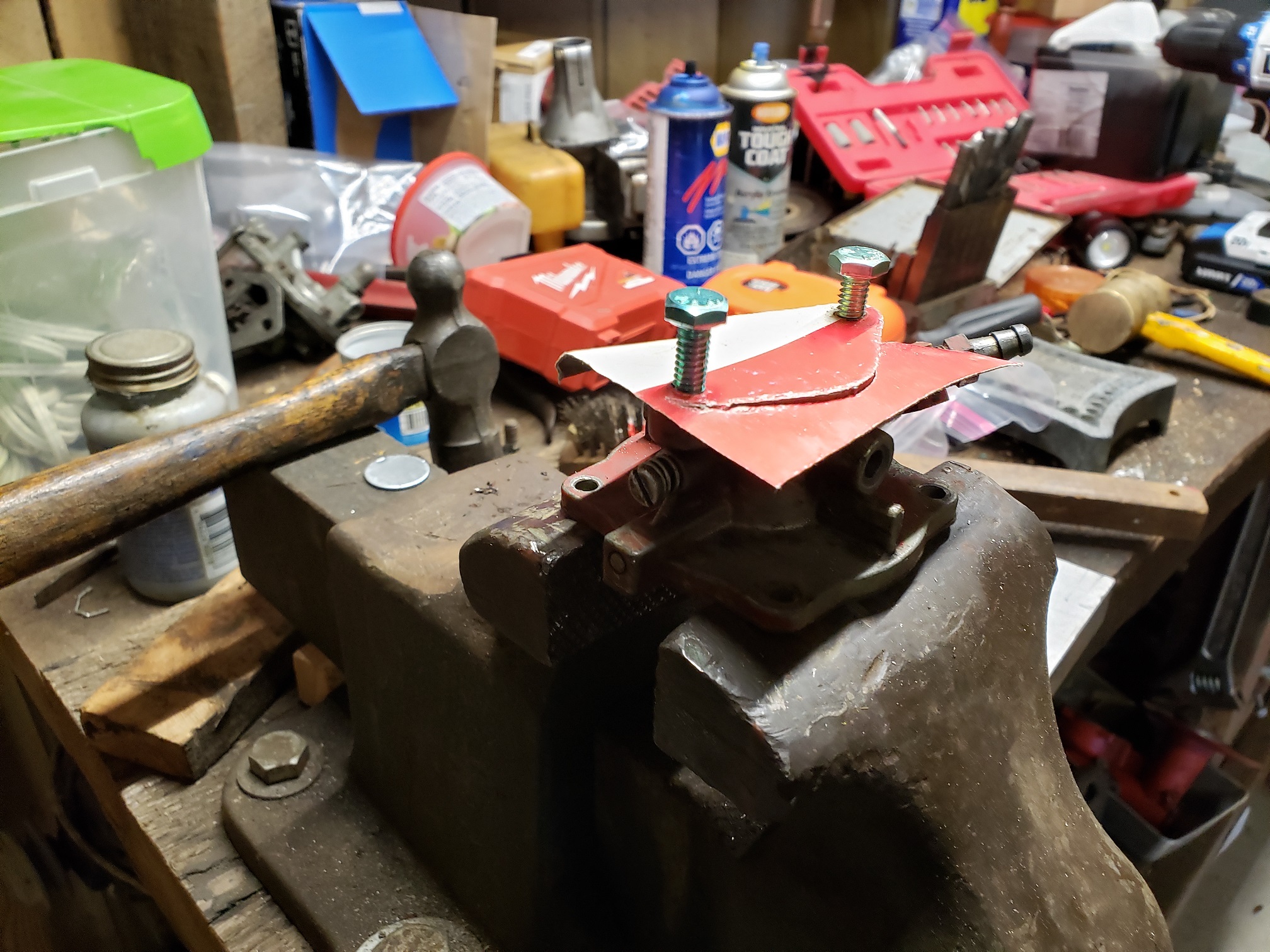 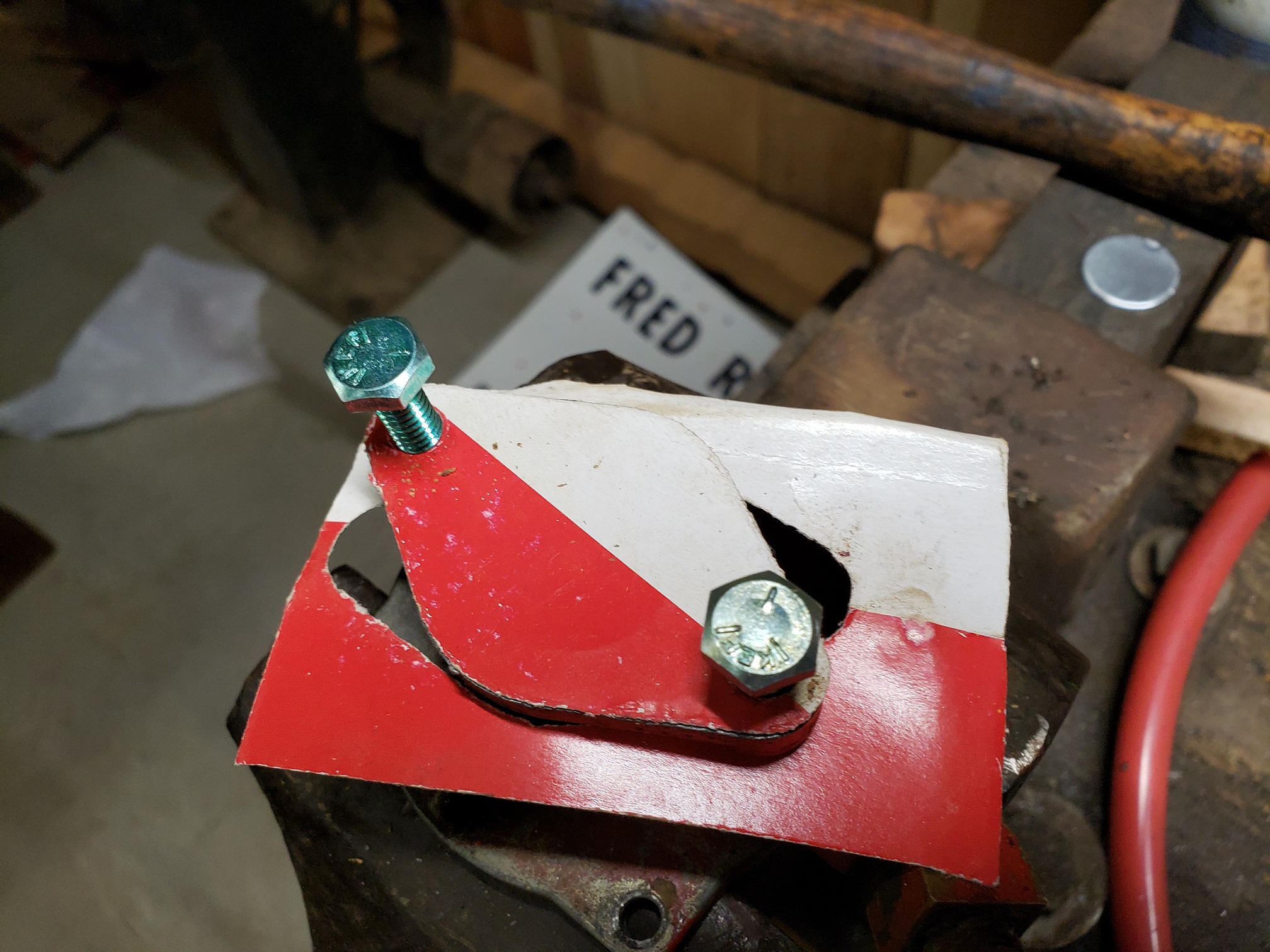 The hardware was used to locate it and a wooden file handle was used to strike it.
We call that dinging a gasket. 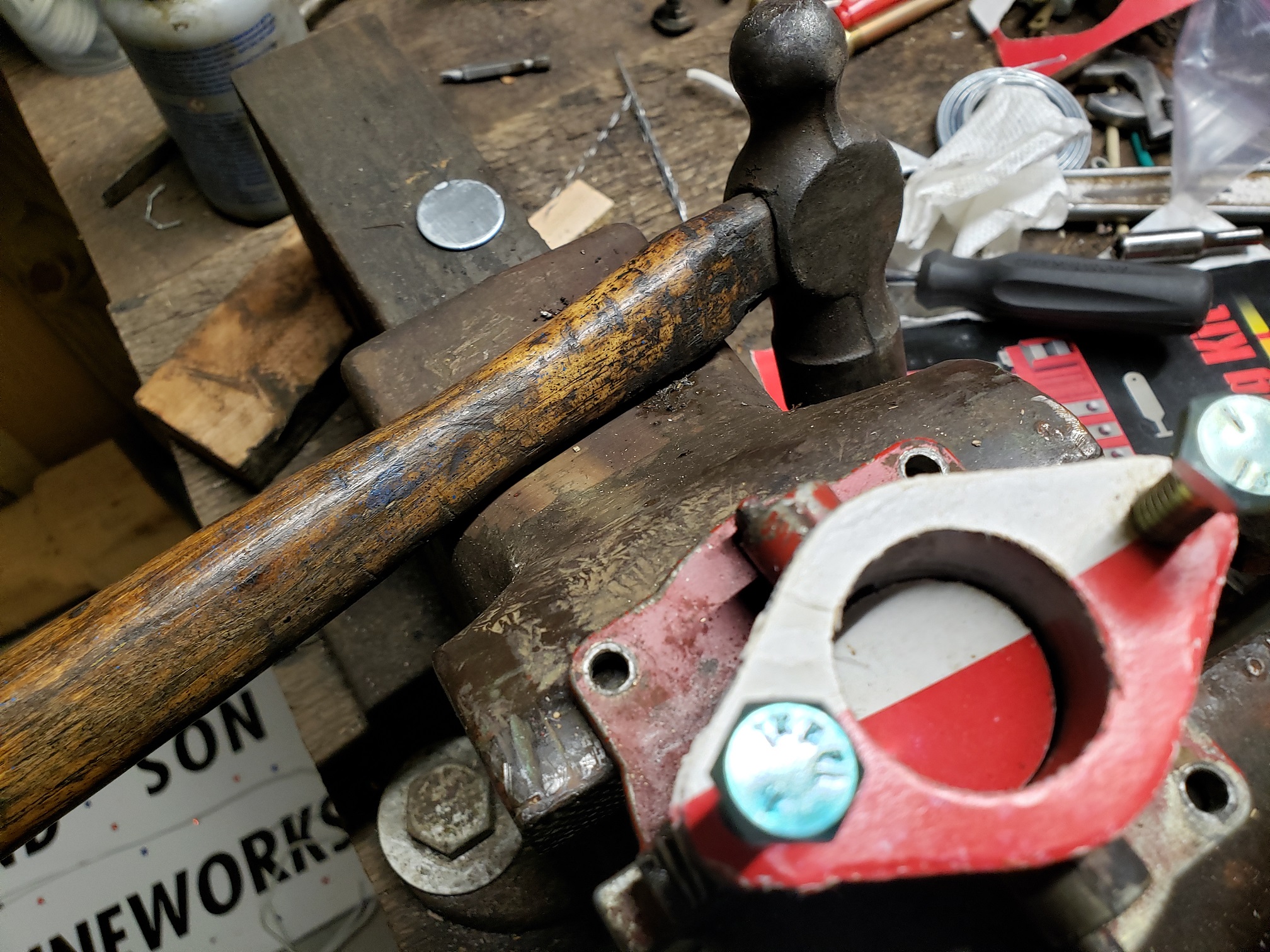 Finito, and no run to the parts store either 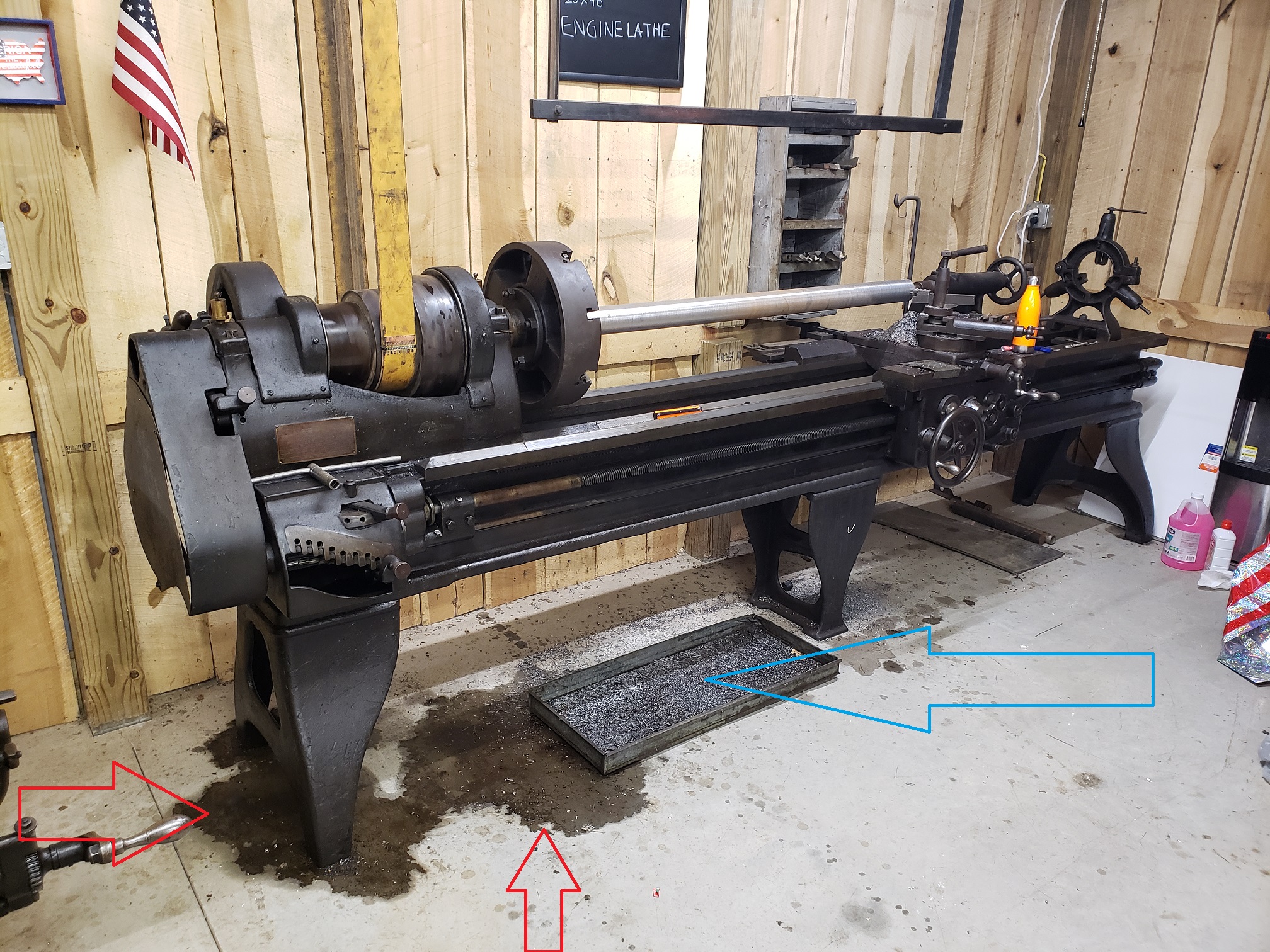 Unsafe, insufficient and ugly
The arrow to the left highlights where an additional tray will be added.

V.I.P Member
Oh wow, you guys are actually running it now--this is fantastic, it should look great when it's ready to go.
I don't have any antiques that are THAT cool.

V.I.P Member
This is incredible. You need to train an apprentice. 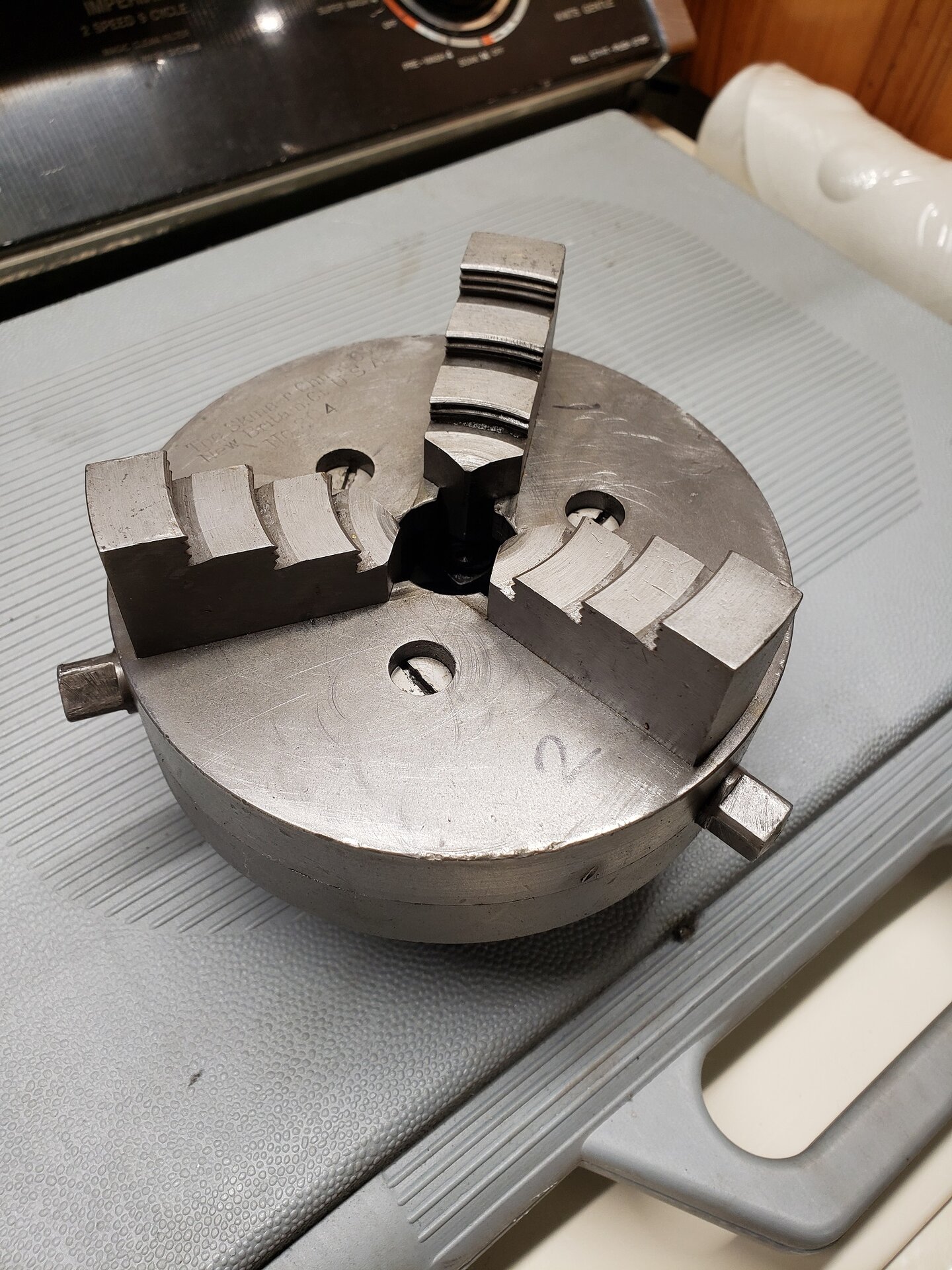 Early Skinner 5 inch 3 jaw scroll chuck.
I did a teardown on it just for general cleaning.
My glass bead cabinet made easy work of removing the slight rust and century old grime to put her back in service.
The unfortunate part of this score was the fact that it only has the larger outer grip work jaws, but it is still something that can be overcome lots of the time with clever fixturing.
The smaller work/inside jaws that are no longer with it are stepped in the opposite direction.

The backing plate is set up to be screwed onto a lathe spindle, so I will likely machine an arbor for it that I can chuck into the 4 jaw on our old Monarch for holding smaller work.
A sixty tooth gear was ordered so I can machine an indexing rig for it for milling machine or even shaper workholding.

The 60 teeth on the gear can be divided into many useful numbers of division which could also serve as a quick spacer with a 100 year old look to it.
Last edited: Nov 20, 2022

Staff member
Admin
V.I.P Member
Since it was rainy all day, I decided to focus on a project for the machineworks.

The recent chuck refurbishment was a cool project, but it was still useless without an arbor.
Lucky for me, I had a bit of free machining 12L14 steel that had one end already threaded that was used as a thread gauge to make a backing plate in order to use a six inch 4 jaw independent chuck that came with my 10K South Bend lathe.
The South Bend is only a ten inch lathe, so it's spindle has a smaller nose thread which is 1 1/2 -8 threads per inch instead of the 2 1/4-8.
Needless to say, that went well and gave me a little bit more diversity when it comes to work holding.
Keep that South Bend thread dimension in mind later, because I assumed the Skinner chuck to have the same thread.
Oops, measure twice cut once is a saying we use.
This time it bit me on the ass
After indicating the part true, I popped a center hole in her to support it for the rest of the operations.
Rough turning the arbor: 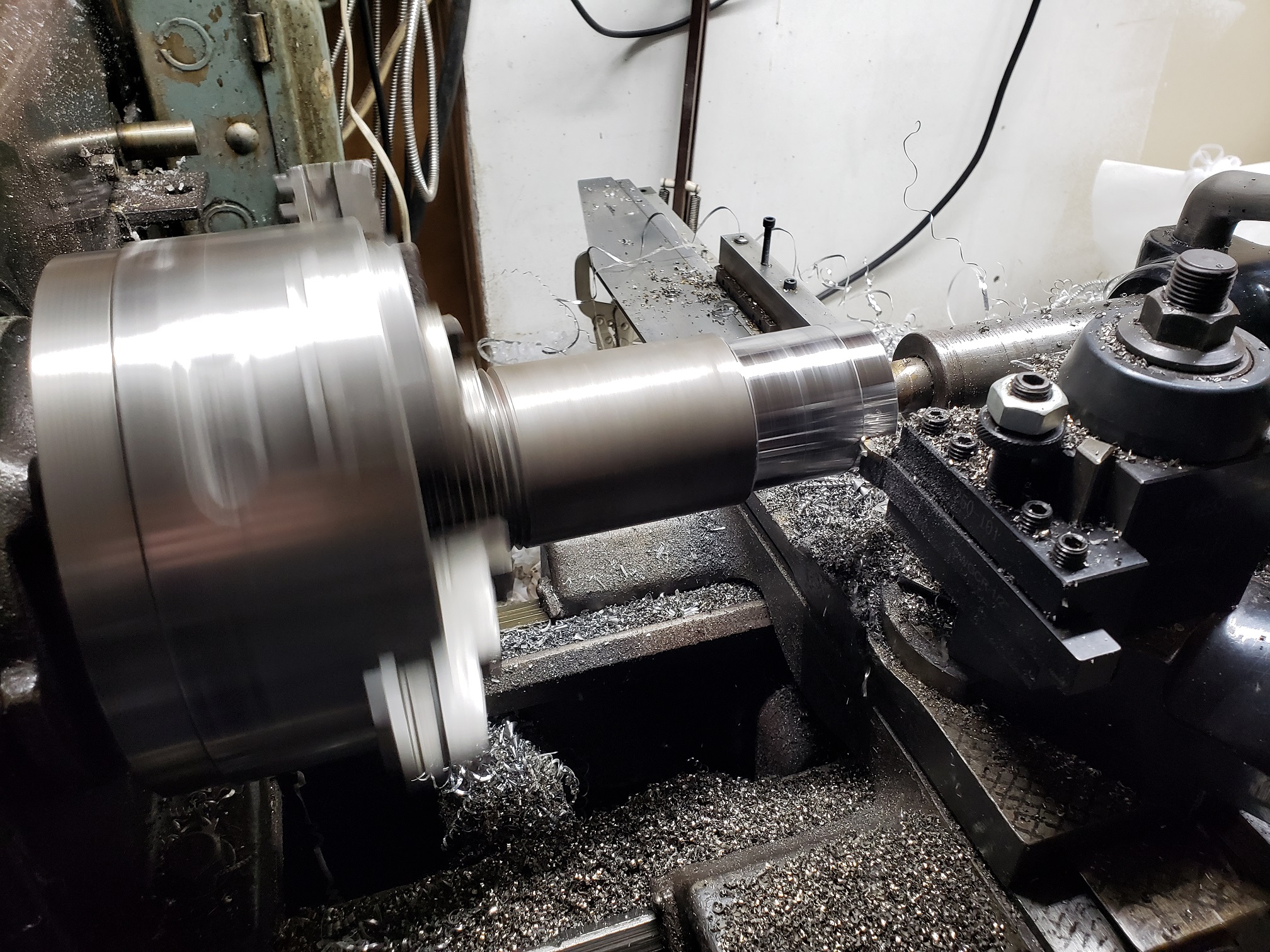 Looking pretty good with a decent finish on the the register area, a clearance groove on the left face and a beautiful 1 1/2-8 thread into their own relief. 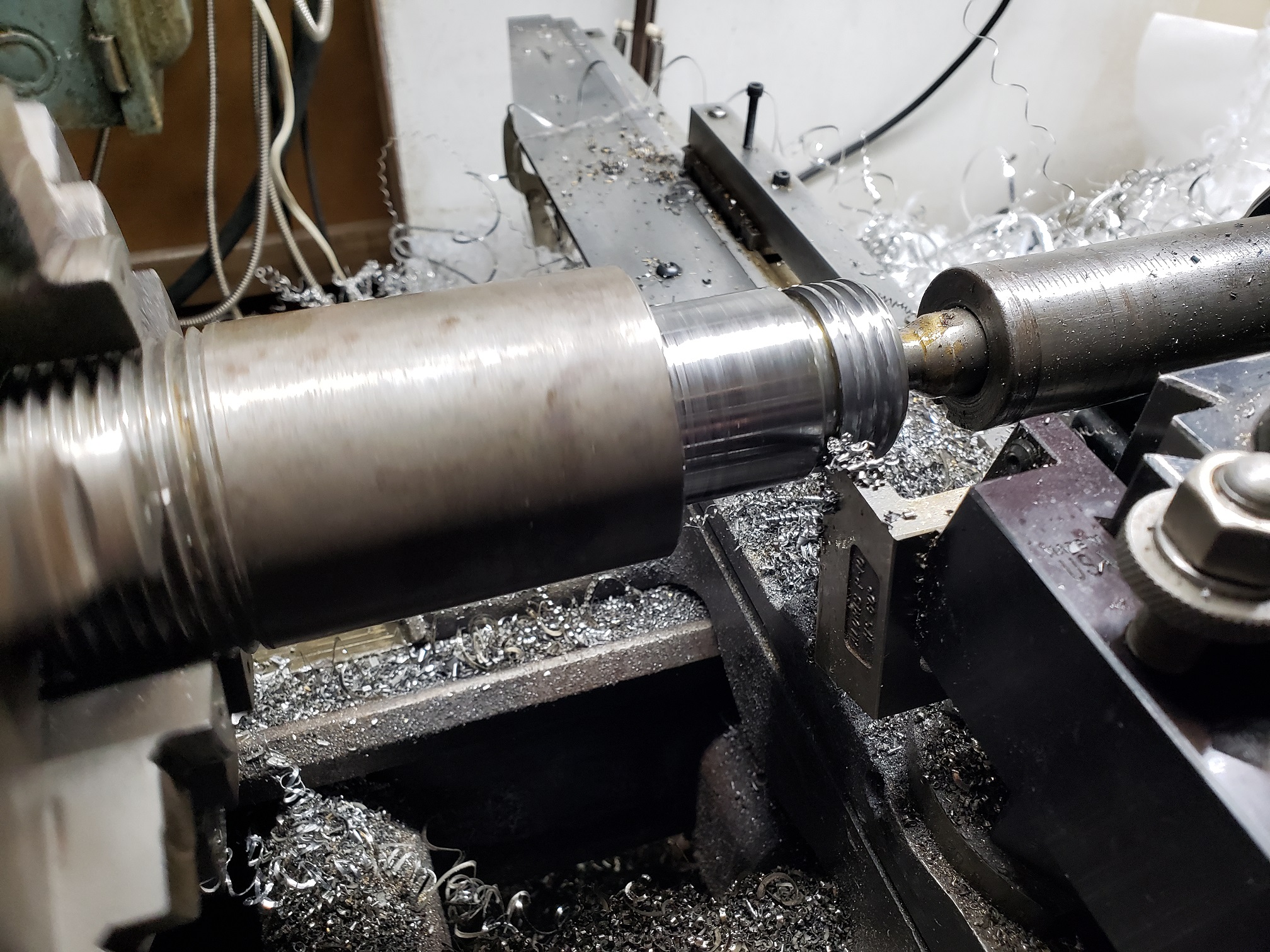 I measured the thread over wires with a micrometer and it was a really nice dimension which would offer a really nice fit.
Combine that with the 1 thou clearance on the register and it should work awesome.

Ok, time to physically check the fit.
Dammit to hell, no dice.
Ok, easy enough, re-chase it with more clearance.
Nope, nada, ain't happening.
Easy enough, grab a thread gauge and positively identify the thread.
Nope, not that easy.
Disassemble the chuck to gain access to it's internal thread.
Grab the gauge and locate the 8 TPI leaf.
Nope, it ain't 8 TPI, it is 6.
Dammit.
Only one thing to do now to correct it, turn the big shoulder back far enough to chase a proper thread on it.
Lucky for me that part went quick
Four hours of my life I will never get back ain't a bad trade for something that couldn't be bought.

Here is the finished product: 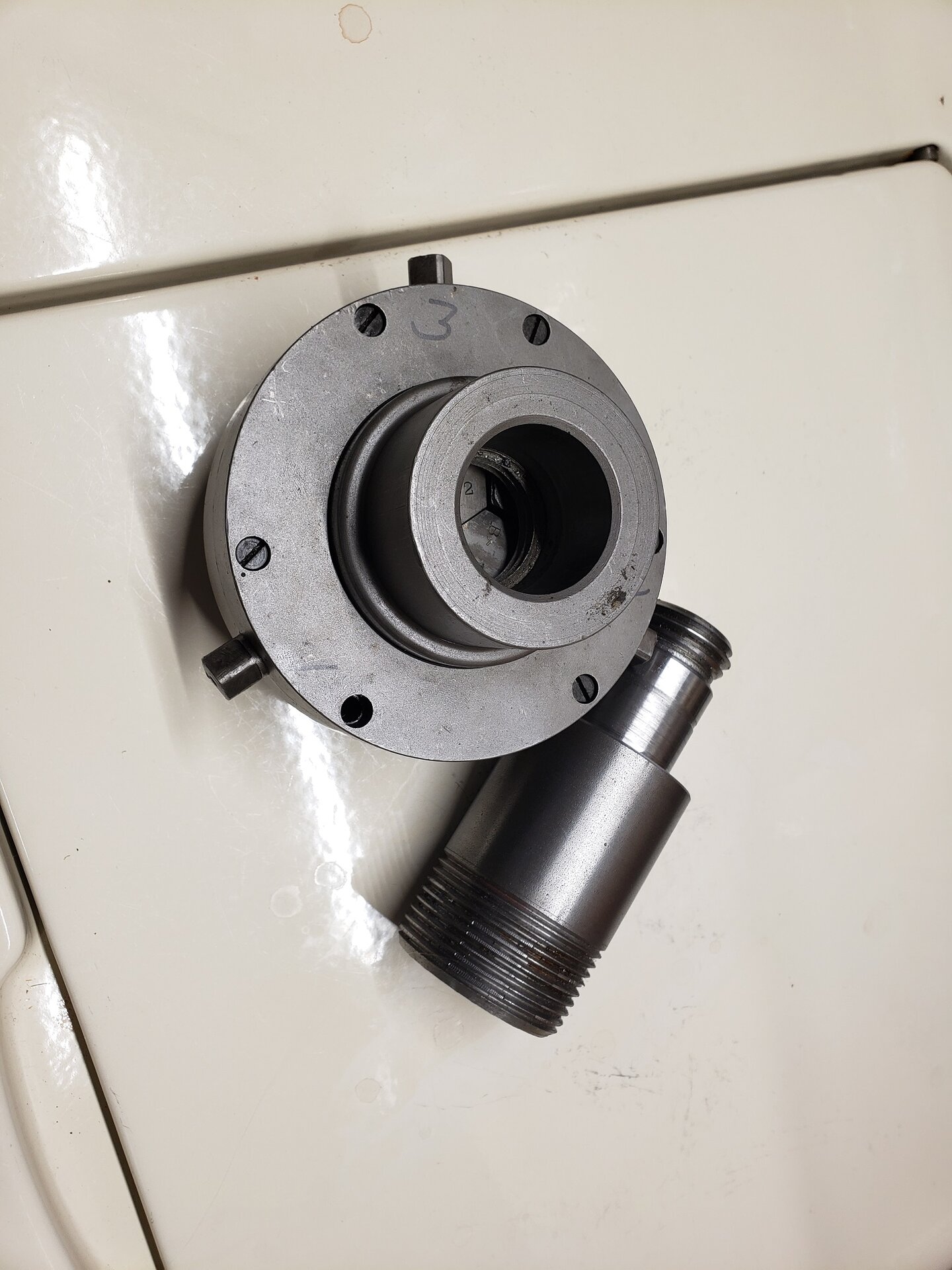 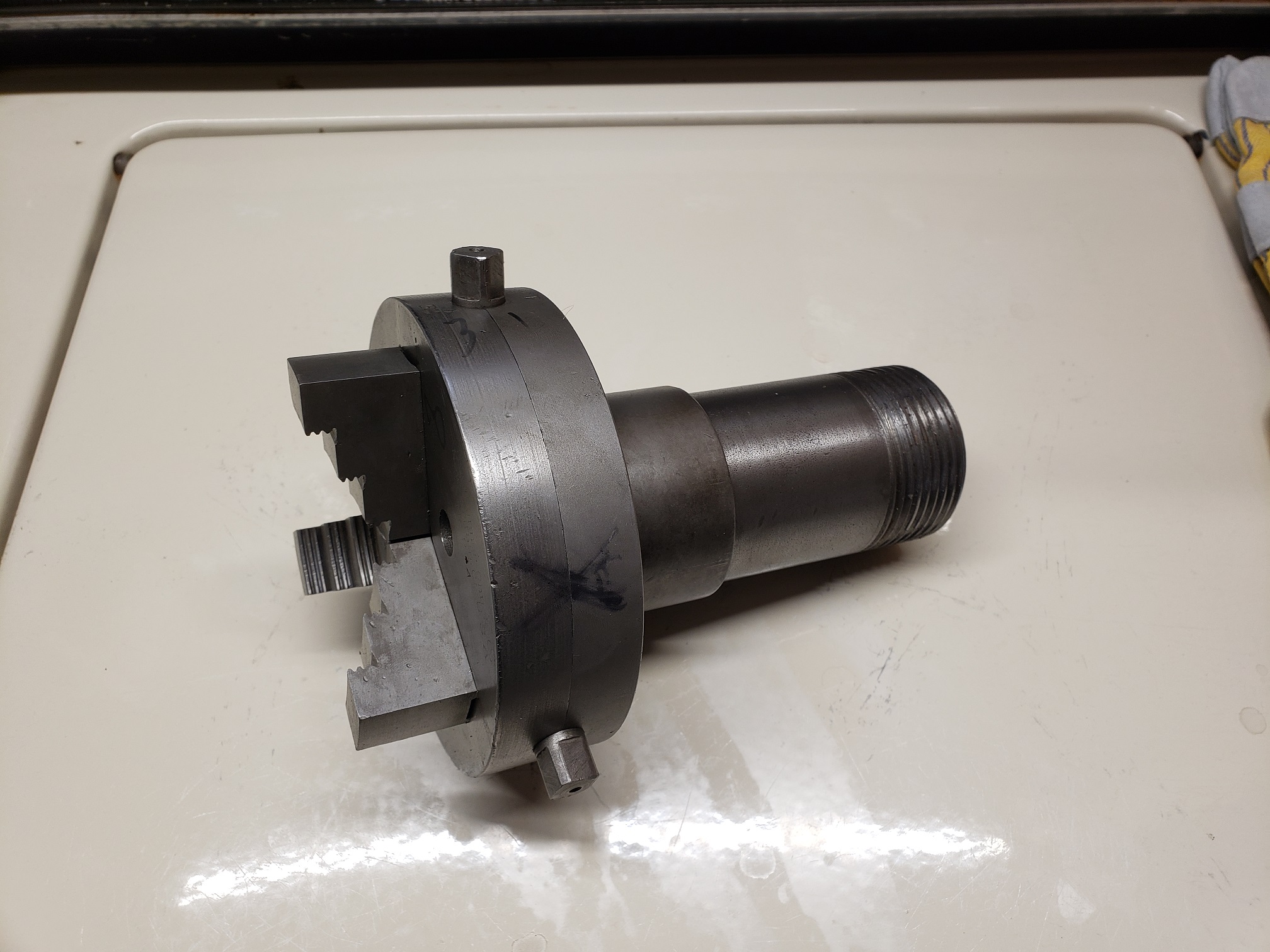 Now I have an arbor I can chuck in the Monarch to mount a smaller chuck on the old girl.
The bonus round will be the ability to take the chucks from my 922 Logan and mount them up as well.


Remember kids, measure once, cut twice
You must log in or register to reply here.