Staff member
Admin
V.I.P Member
The annual National Pike Steam Gas and Horse Association summer show offered me a very special opportunity to demonstrate and operate turn of the century machinetools for three days last weekend.
As someone who is from several generations of machinists, it was a honor to miss the show in order to actually be a pivotal part of the show in a permanent display area.

Before his passing, Mr. Clark was an avid fan of the show.
He started off at an early age as a well driller, following in the footsteps of his father who was involved in the earliest oil rigs in Titusville Pennsylvania, building and operating his own rig at the age of 17.
He drilled for water and geological surveys and for the coal mining industry.
Over the years, he expanded his business to include a lineshaft machineshop for both repairs and for trade.
After Mr. Clark passed on, his son continued the business until it was his time to retire.
As a tribute to his father's lifetime, he donated the remaining equipment to the show.
The grandson of Fred Sr. found and had his Pap's final rig restored and placed in front of the shop at the showgrounds.

A few months ago, I had the pleasure of meeting one of the three remaining founders of the Association and after some discussion about my thoughts on the show, I commented that the oldschool shop was really cool, but needed put online as a working display like the rest of the show is instead of collecting dust.
He replied that it was because they didn't have anyone interested in running it.
I asked him if he was interested in talking to a machinist who might want to and he said yes, how can we get a hold of him.
I said you are talking to him now.
The idea was presented to the powers that be at a formal club meeting I attended and I was handed my key.
Without further ado, I welcome you to the Fred R Clark and Son Machineworks
Giant woodlathe

In the past, motive forces for equipment was provided by water wheels, steam or at times electricity. A common shaft system was utilized to power the machinery. If a shop had 100 machines, the shaft system had to support all of them at one time. Since they were all tied to a single power source, each machine had to have a disconnect from the system so the entire shop didn't have to go on hold.
The earliest disconnects were achieved by moving the drive belt from a fixed pulley to an idler pulley that was on the same shaft. This was done by a long handle and a fork that acted directly on the belt.
The lineshaft is both noisy and dangerous. You, as the operator are always directly involved with the belt and associated power AKA danger of getting caught up in it.

The planer appears to be the oldest machine in the shop.
Because record keeping was scant back then and not much is available to research it, I would estimate it to be from the late 1800s.
The work is fastened to the table which traverses under the cutting tool longitudinally.
The tool can be raised or lowered by a crank and can be auto cross-fed to traverse the workpiece to flatten it or produce features on the stock. The tool post can be operated on an angle as well.
Gear driven, slow and steady, but perfect for the machine world 100+ years ago.
Modern rotary milling machines have rendered the old girl as not much more than a curiosity and many were no doubt lost to the scrap drives of WWII.
That makes this old gal kinda special in her own way.
She's missing a few parts and needs some attention before we can wake her up again, but she shows a lot of promise.
I hope to see it making chips in the near future.

Pedestal grinder
This dinosaur, after a thorough lubrication, is up and running.
Like any antique deserves, I don't intend to clean any of the dirt from any of this equipment to preserve the history of it unless it will destroy the moving parts.
This stuff has been around a long time, so some care must still be exercised in order for it to continue to amaze and educate for many years to come.

We are using a modern synthetic belt because of cost restraints, but the original material was leather:

It was a 20 inch swing over the bedways.
Monarch didn't produce a lathe until 1914, but by estimate, it could well be 100 years old.

Steady rest being used to establish a centering hole with a center drill fitted to a #4 Morse taper driver.

Above, lathe tooling shelf
Below, shaft placed on tailstock center

Hand cranked drill press with power feed
This was all frozen up until I disassembled it for cleaning and lubrication.

E E Garvin & Company #1 horizontal milling machine
This one is fitted with a dividing head and support center with the option of gearing it to the table feed to allow it to do helical milling.
It is very likely to be from the early teens as well.

Quite universal but slow, machinists say you can make anything on a shaper except money
Last edited: Aug 26, 2021

Pot belly stove
Like the old saying goes, "colder than a well digger's ass" and most likely used for warming them up

Staff member
Admin
V.I.P Member
When senior got older and arthritis destroyed his knees, he built this three electric motored contraption as his mobility scooter

Outdoors of the shop is his last drilling rig he built

Staff member
Admin
V.I.P Member
I was just finishing up a demonstration of the shaper when an elderly gentleman approached my barricade and removed the chain to step inside of it.

Sir, I can't really allow you behind here was what I shouted above the din of the lineshaft.
He next said that he used to run that old Monarch lathe.
I asked him if he had been an employee of the senior Mr. Clark.
He said no, he was Mr.Clark.
Junior or & son was very pleased to see his father's machinery up and running and cutting metal instead of collecting dust too.
Now how cool is that?

Very cool stuff! Ever since I read Zen and the Art of Motorcycle Maintenance I've wanted a metal lathe.

Unclewolverine said:
Very cool stuff! Ever since I read Zen and the Art of Motorcycle Maintenance I've wanted a metal lathe.
Click to expand... 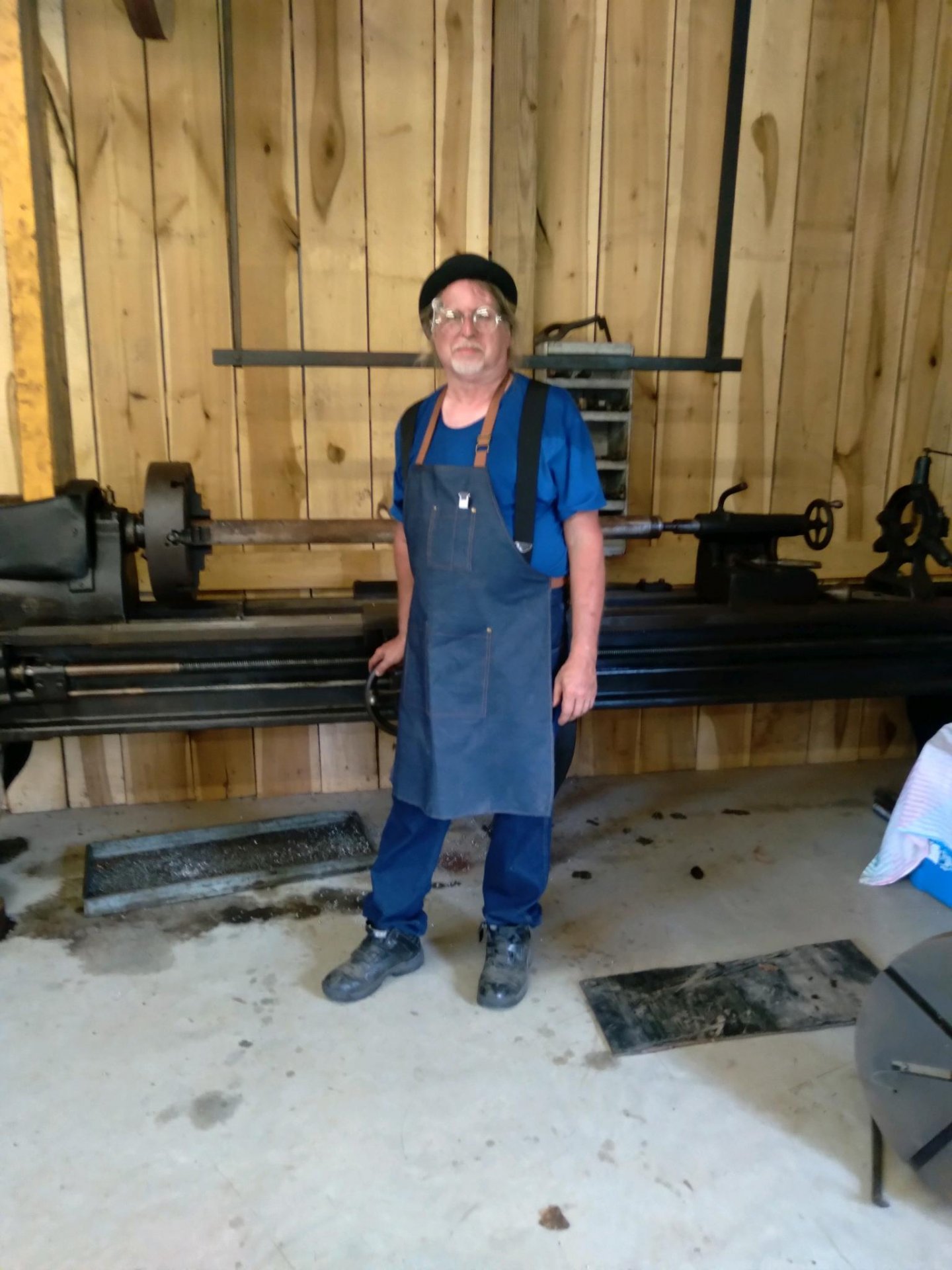 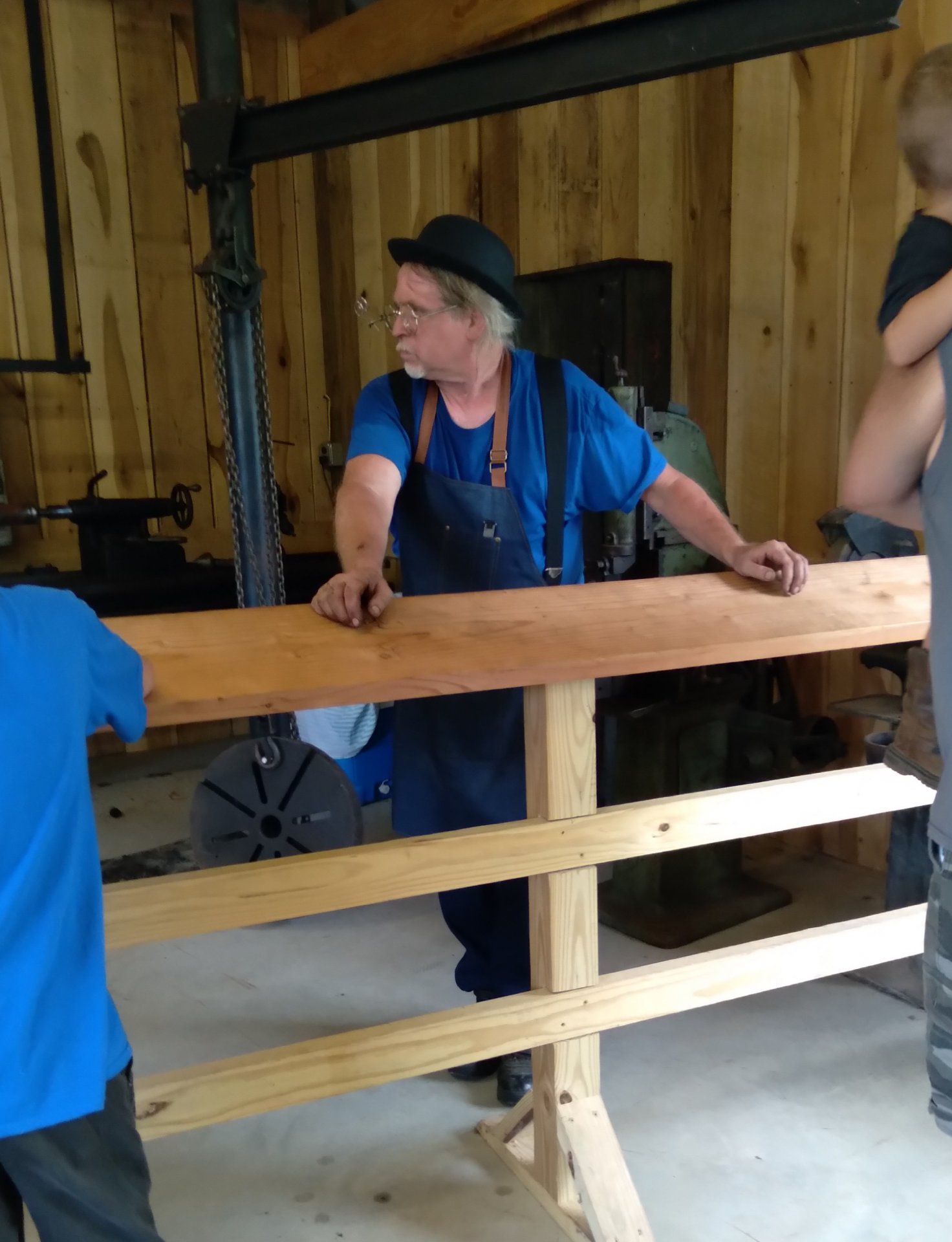 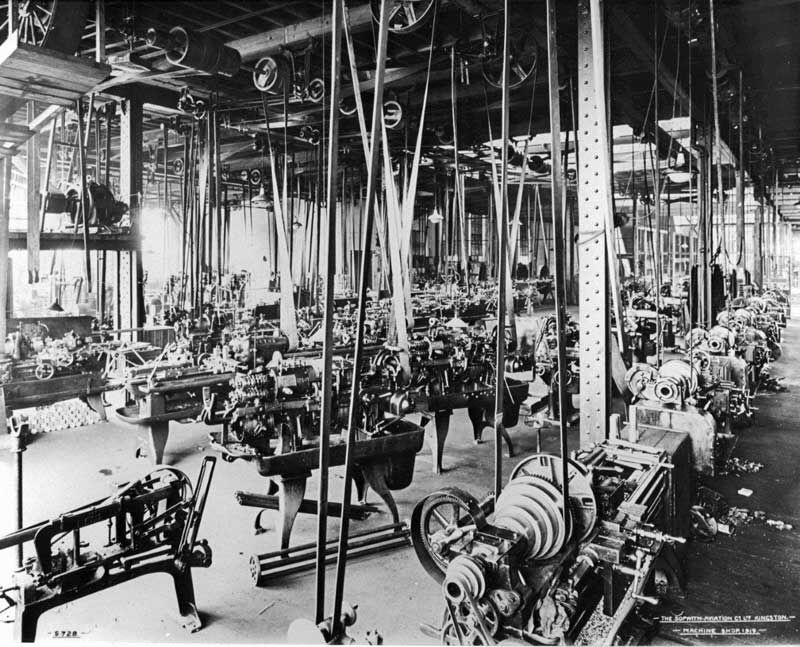 Typical of a lineshaft shop 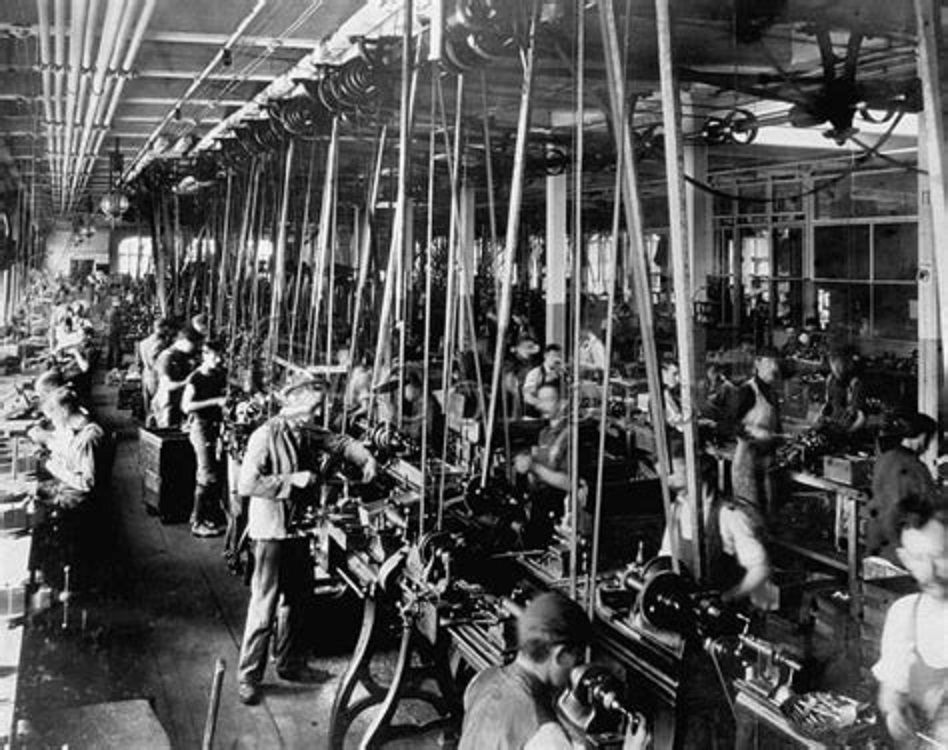 Staff member
Admin
V.I.P Member
I found humor in a sign I saw posted at the show that near the bottom stated that any unsafe acts being committed should be reported at the main office so steps could be taken to prevent them in the future.

Originally, the drilling rig was mounted on a Ford TT truck chassis but was later mounted up on the 1939 Ford cab and chassis.
To the right of the truck is the building that houses the Machineworks.
Before the spring show, I intend to give her a bath and a fresh coat of wax and will proposition the club for a lean-to shelter to protect the old gal.
The club actually uses a an onsite sawmill to cut our timbers, so it will only require labor to put it to use.

Staff member
Admin
V.I.P Member
In case anyone is wondering, this shop is now my responsibility to use for educational purposes and to preserve it's history.

I hope to be able to pass the torch when I'm unable to continue.
F

The stove has to be my favorite, traditional, really liked it a bunch.

The chair/car that he built last, that rocks!

Thank you for taking the time to post all of these, fascinating. I’ve worked in a machine shop but it was woodworking not metal.
You must log in or register to reply here.