How to stay sane after a job interview

After some silence, it's time for another blog entry! This time, my title is full of clickbait. Because (I'll let you all in on a little secret here) this is not actually an entry about effective ways to maintain your sanity. No, this is just pure clickbait... Or, you know, a bad joke. Either way, if you are looking for a list of super useful tips, this is not it. If you're looking to have a giggle at my expense, you're in the right place.

I've already secured a job as a doctor some time ago, which I will be starting soon. Earlier this week though, I had the amazing opportunity to interview for a future position as specialist registrar in a specialisation I care deeply about. I prepared for my interview, secured references, focused on my strong features and flaws. Did all the works. Picked out my outfit two days in advance and made sure everything was clean and ironed.

The evening of the day before, I opted for a bowl of comfort food, a hair mask, facial mask and some netflix to soothe the mind. Before going to bed I laid out my clothes for the big interview. Went to bed nice and early, had a restful night, and woke up refreshed, enthusiastic and confident. Way too early, but at least I was up in time. Went through my special "big day morning routine" This involves blowdrying my hair with a diffuser to give my curls some volume, then spending at least half an hour failing at multiple supposedly easy stylish hairdos and finally settling for either a ponytail or a simple hair clip (which usually looks weird). I also spend at least 15 minutes looking in the mirror wondering why my head looks weird. Then apply some makeup. Bonus points for getting mascara on the bridge of my nose. All was going well, I was moderately confident about my looks (which is always the thing I fret about most, on the day of my interview. Wonder what that says about me?). I had managed to not feel nauseous after breakfast, my palms' sweatiness was only medium and I was about ready to leave.

As I walked into the living room to put on the blazer I had prepared the night before, my cat raced past me, wildly playing with something. Which, in itself, is not unusual. Unfortunately, I discovered within seconds that the thing my cat was playing with was one of my blazer's buttons, now no longer attached to said blazer. In fact, two buttons were now missing, due to my cat being an enthusiastic little bugger. With only five minutes to go until I really had to leave the house I began to panic. Looking into my closet I didn't really see any suitable replacements to the beautifully tailored black blazer I had been planning to wear. Some were from skinnier times, some were a little rumpled, some had cat hairs on them, looked to cheap or were way too colorful. I ended up wearing something with a very lively print. Not my first choice, but the best option available. During this frantic wardrobe change my face and neck began to itch, and one last look in the mirror confirmed my fears: my skin had decided to break out in stress hives. Still, no time to waste, I went out the door.

Even though my palms had reached the point of excessive sweatiness, I think the interview itself went relatively well. I'm not sure how much of a niche they have for sweaty candidates with red blotches on their faces, though. (Which is a bit of a comical exaggeration. Due to the cold autumn weather the swelling on my face had mostly subsided by the time I was interviewed, and I wiped my hands down vigorously right before the start of the interview, much to the amusement of the chief's assistant) I was brutally honest, as befitting an Aspie, which I think caught them off guard every now and then. I did not mention being on the spectrum, however, my strengths and weaknesses (whether related to the spectrum or not) I disclosed honestly. All things considered I think I did the best I could, gave a reasonably accurate portrayal of myself, and now I'll just have to wait until I find out whether I'm what they're looking for.

But the waiting part, that's where the real fun begins. You see, like many of us on the spectrum, I occasionally suffer from a teensy bit of anxiety. And I'm an expert at overthinking everything. I walked out the door with a positive feeling, and managed to make it all the way home without second-guessing myself, but after that, it got a little harder. So far I've refrained from obsessing over the conversation. I'm going to try to keep this up. But two things about the interview keep bothering me, like mosquitoes zooming around my head:

1) Is honesty in a job interview always the best approach?
I'm not advocating one should lie or fudge the truth in an interview. But I'm wondering whether Aspie Honesty™ is the best way to go. The truth, the whole truth, and nothing but the hard, uncompromising truth. Some might find it refreshing. The interviewers definitely know what they're in for. But I think it can be a little off-putting as well.
For instance, during a recent interview, one of the interviewers mentioned that my CV and motivational letter made it seem like I spend a lot time by myself. And how they noticed I hadn't put 'teamplayer' as one of my traits. I responded truthfully that I work well in a team and people enjoy having me as a coworker, but that I just prefer to mostly work alone. I'm not sure whether that's an accepted response.
Another example: my CV states that I'm introverted. One of the interviewer asked me the following question about this: "If we, your coworkers, ask you to hang out with us, would your introversion negatively effect us?" My response was immediate: no, it negatively effects me, because even though I'm having a good time hanging out with a group, I usually don't know what to say and when to say it, so I just listen and laugh along. I'm not going to ruin your night, I just need a little more time to feel comfortable, socially, with a new group of people.

Both of these answers were fully true, showed who I am, and showed that I am not afraid of exposing my vulnerability. The thing is though, I feel really vulnerable now. I feel like a shellfish on the beach that has enthusiastically opened it shell all the way up, only to realize that it's surrounded by seagulls. Is it weird to feel increasingly vulnerable after the interview is long over? I will need to shift my attention away from this, because otherwise, not getting the job will inevitably lead to a negative thought spiral. And that's no good for anyone.

2) Odd questions to throw a candidate off balance suck for everyone, but they really suck when you're on the spectrum.
No further explanation needed, really.

I think that was it, for now. Now I'll just focus on other projects. Like finally learning how to code, preparing for the job to come, and getting around to spring cleaning. That should be enough to keep me occupied for a month

I'm curious though. How do you feel about baring yourself (figuratively. I SAID FIGURATIVELY!) during a job interview?

I think the only people who wouldn't feel the teensiest bit vulnerable after a job interview are those who couldn't care less about the job, and those who are patented liars (not mutually exclusive). In that situation, it's perfectly normal for anyone, spectrum or not, to feel some kind of nervous or vulnerable: the list of your experiences is looked at through a magnifying glass, interviewers look for the slightest unusual thing (sometimes to clarify, sometimes as a conversation starter), and I guess part of the exercise on their end is to throw the candidate off balance to see how they react to pressure or unexpected events. Definitely not the best for an Aspie, I know.

Regarding honesty, while I do believe that it is the best policy, I've come to understand that you don't need to be transparent on 100% of the content, and it's best to find a way to be honest while not shooting yourself in the foot. That can usually be achieved through some rewording and the occasional removal of something you feel they should know, but is actually somewhat irrelevant and really a disservice to you.

At any rate, congratulations for getting an interview and going there.

As for that darned cat... that sucks. I would have been in such a panic. In case you ever have blazer issues again, safety pins on the inside are a quick fix for a button (of the slightly dangling type with just one hole); hanging the complete outfit of the day on a hanger and in your closet works to keep it off-limits for the cats.
I do have a serious response I want to write, but until then, I must quote @RiverSong 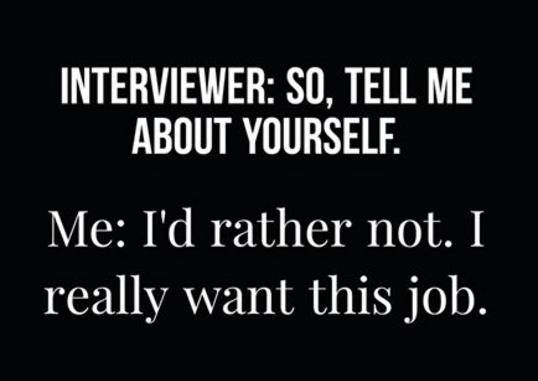 Ambi said:
I do have a serious response I want to write, but until then, I must quote @RiverSong

Quite brilliant. And something I wish I had the balls to say in a real interview some day