V.I.P Member
On Linux right now, having a particularly large and comprehensive download of file updates. Since this download I did earlier today, I could swear I see a distinct improvement in the fonts, with both Firefox and Brave browsers. Even though with Firefox I'm overriding the forum's fonts using the "Ubuntu" font that comes with Linux Mint. As for the Brave browser, it relies on whatever font the forum uses within its CSS coding. Still, both look quite improved. I just wish I would have paid more attention to the details of this rather large update downloaded today.Though I did notice the upgrade included distinct kernel changes.

I still can't believe my eyes...lol. It really does look better. Someone must have heard me....

V.I.P Member
One other thing I forgot about is that recently within Linux Mint 20.3, I opted to change my Nvidia video driver to the earliest one I have access to (Nvidia 340) in the "driver manager". Though I did that about two or three days ago, and still have no idea whether or not it impacted how fonts appear.

Up to now I've used a rather old Nvidia card, the GT 650Ti. Using this older driver seems to give me better functionality. The non-proprietary open-source video driver (x-server-xorg-video-nouveau) that can be used in Linux Mint 20.3 renders things well enough, but it lacks the "accelerator" features of the Nvidia drivers. But I've found that with my old video card, it seems reasonable to choose an older driver compared to the recommended one (Nvidia 470).

It's all really good news to me, whatever it is that seems to have improved how fonts look in the browser. So I may simply opt to use Linux permanently and upgrade a few things like a newer video card on this nine-year old computer rather than build an entirely new one just to appease Micro$oft Windows 11. Time will tell.

Some interesting things on the horizon when it comes to reduced video card prices in the marketplace. But which ones get discounted and whether the pricing stabilizes is anyone's guess. I know that Asus has publicly stated their Nvidia "30" video cards will drop in price on April 22nd of this month. So I may pull the trigger on an older card like a GTX 1660Ti just to get into the game again. Enough for reasonable frame rates at 1080p.

Anyways it's nice to see some better-looking fonts inside web browsers using Linux. And without having to increase their size! Hoping a few others using whatever distro may be experiencing the same. Cheers...
Last edited: Apr 4, 2022

V.I.P Member
Interesting to notice that at this point in time in either Linux or Windows, when you draft a post in this forum the font quality is still degraded. That once you post it, it renders just fine.

Forcing me to ponder if this has to do with Xenforo's CSS coding and choice of fonts, or something much broader more relative to both operating systems?

From my own observation, the common denominator of my font comments still seems limited only to fonts being transmitted over the Internet that remains the issue in terms of what it is that can degrade the visual quality of a font.
Last edited: Apr 5, 2022

V.I.P Member
If anyone is interested, I think I found what has been amended to improve the appearance of fonts in Linux Mint 20.3.

It would seem they have done something regarding the "Rgba" selection under antialiasing in the font settings of the system settings menu. When I selected another form of antialiasing, the quality of fonts looked awful again. Switching it back to "Rgba" made all the difference in the world. Even when I reduced the text scaling factor by 0.1. 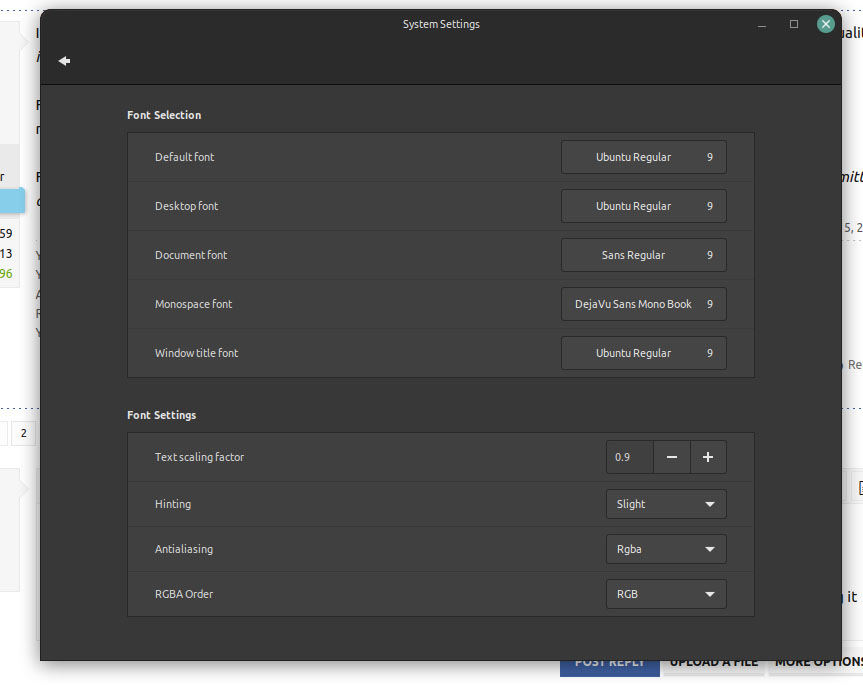 I'm from the other end of the spectrum.

I realise this is a very old thread but I just found it and Linux just happens to be one of my special interests. I figured I might be better off talking about it here because with most people this topic makes their eyes glaze over.

I started to become disenfranchised with Microsoft back in about 2004. For a decade after that I was running dual boot, in a similar fashion to you but with internal drives. It’s so much easier when each system gets it’s own drive. By the time Win8 came out I was only using Windows occasionally and couldn’t be bothered with it very much any more. I no longer have a working copy.

When I first started reading this thread my immediate thought was graphics drivers. I’ve tried quite a few different versions of Linux over the years, the biggest difference between them all seems to be how up to date they are. For this reason I pretty much stick to Ubuntu and Fedora.

Fedora is always the most up to date and the most likely to work as advertised “straight out of the box”, it’s also the most secure. They also give you a download that has the Cinnamon desktop already set up, same as Mint.

The downsides with Fedora are that they bring out a new version every 6 months and they only provide support for the latest 3 versions, that means any version is really only valid for about 18 months. You also have to install a third party repository for third party and proprietary softwares and drivers. Just click on the appropriate links to install through your web browser.

I’m running Ubuntu again at the moment but in lots of little ways I’m not real happy with it and will probably go back to Fedora soon. Naturally I run the Cinnamon desktop in Ubuntu too, I can’t stand the default Ubuntu desktop.

The advantages of Ubuntu are that they provide a Long Term Service version that gets support and updates for 5 years, and for the average mug it is a bit more user friendly, but it’s just not as smooth and polished as Fedora.

And for playing games I just download the Windows versions, usually from GOG, and play them under Wine. Official documentation for that is pretty difficult to follow and make sense of, I’m happy to give simpler explanations for them if you want to play around with it.

V.I.P Member
These days I use Windows only enough to install necessary upgrades. Otherwise I'm using Linux Mint 20.3 and Linux Mint 21.0 LTS. I love that version 21.0 is valid for the next five years...which pretty much makes Windows 10 expiration date in 2025 a moot point. Wine continues to amaze me on either version, as it renders Photoshop 5.5 better and more stable than Windows 10.

I hear Fedora is supposed to be the darling of Linux lately, though I'm fine with Linux Mint.

I'm from the other end of the spectrum.

As long as you're happy with whichever linux you're using that's all that really matters.

As for the rendering thing, same story with video games. Linux handles memory in a much more efficient way than Windows. You'll also find Libre Office handles very large documents much better that in Windows.

Cheers.
You must log in or register to reply here.