A gift that just won't stop giving, and never will

V.I.P Member
In the waking throes of the Witching Hour, boredom takes my mind over as I search for yet another way to entertain myself... It'd be easier if Hurricane Ian wasn't outside my house, throwing a faceless tantrum and constantly bugging the crap out of me making me wonder if I'm going to wake up out of bed and open the door to WalMart's stockpile room thinking it's my own bedroom door.

But here I am. I found myself a new kind of game that I think will actually sharpen my mind. Heh... Seems like I'm always finding new stuff about myself every day.

But... Then there's Maddog... Truth is, he was actually pretty nice to me and was in a pretty good mood today. We have friends staying over and he's roughhousing with them but, hey, that's what guys do.


Either way, I'm the kind of guy with the kind of intelligence and sharp mind where I think twice, then once again, as quick as you can fire a gun, about everything I do, say and look like, from which flavor of Ramen I'm craving that morning to which of my feet touch the 8th step going up the stairs... Yes, it's an autistic thing, but I'm like that for many reasons that are actually kinda really important, somehow.

So, bottom line, anxiety started taking over. I've been recovering from an obliterated left lower half of my entire body from my waist down to my kneecaps recently because it was ***really*** smart of me to record a Wrestlemania parody video for my YouTube channel on my front porch, and as it turns out, contrary to popular belief I have learned two things about myself: one, I am most definitely not Lex Lugor, and two, I am not the kind of physical body build that will ever successfully pull off a Hatchet Snatcher Warhead on any part of the environment and takeless than 27 seconds to stand back upright painlessly.


So i needed a break tonight. I needed to chill out somehow, and i'm sorry but anyone who is somehow able to sit/lay and practice deep breathing without relaxing music or visuals is just crazy.

My therapist, on our last telehealth appointnent, decided to perform an *actual* hypnosis session with me this time. This wasn't just a simple guided meditation with my little energy-made comfort buddy Aloe, no... This was hypnosis, as in, "does anybody know what I was doing just now" after I was woken up. Pepper knew that traditional stuff wasn't working for how severe my autism disorder is. I don't know what kind of luck I had being born with this kind of.... being? But i'm not questioning it because obviously, there's some reason God wants me like this.


Anyway... So, the appointment finished and I fell back on my pillow again, and as always, my betta friend came to help with my nap.

Now, getting back to present time...


I decided to keep the flow of the session going and I popped in my new wireless buds my friend at the house gave me, and I pulled up Fiona Clearwater's guided meditation on good old YouTube.


The lady's voice was of course enough to reach the core of my mind and gently turn off my disorder for the next twenty six minutes and thirty something seconds...


....and I'm in a forest.... A forest, and.... It... Looks like the trees are really all... I can't even see the top of them. There's something different about this place though... Like, I'm walking forward, through the trail but... I'm lighter than usual. And then lighter still and the next thing I look down... I'm floating...? I just remember drifting forward, real slow, and of course I'm taking this opportunity to add whatever feels right to the setting, but the storm outside is making it hard. It's so noisy yet somehow it's not enough to wake me up. Now, my Mind's Eye is very tactile when it comes to sensory things, so with the constant sound of water hitting metal and walls outside and pockets of water being napalm'd upward by cars trying to get home safely, I can't ignore what it's making me think of because it's a constant sound. I pride myself in having the natural ability to very quickly and easily adapt to certain types of situations like this that aren't dangerous or life threatening, so I call up my little gift of psi and toss some energy into a simple visual entity that can align itself with the nature of my senses.


I could not believe I was able to amaze myself in such away, because when I opened my "eyes" not in the waking world but in this Domain of Leaves, I was treated to a new sound, one that was softer and more pleasant than stormbound rain. Very soft, feathery "ktink" sounds, they too were a constant noise but... I welcomed this new sound, so I relaxed as they kept coming and greeting me, and my sight matched this new feeling with the sight of a little fluttering, smiling fae, wearing a kimono which was a sleepy shade of blue. She glided over to me and floated next to me as I did the same. Pointing where she just was, and happily but lightly tugging my sleeve, she directed my attention to an enchanting display of slow, gentle, lightly moving glowing beads of varying sizes and beautiful, vibrant glowing colors, and she was using these little gestures to command them in all manner of different patterns and movements, none that ever moved too fast but none that ever moved too slow.... They all moved at just the right speed, and the little fae next to me just continued her display of magick, making sure I was calm and relaxed and that I felt safe with her. After some time she suddenly held up her palm as if to say "Stop now" to her light show. Still close enough to me that I could reach out to her, she put a soft little hand over mine and -- did she just talk?

I smiled back. "Cool.... I always had the sneakiest feeling I was about to think about someone like you."

I suddenly started to feel soft pulses of warmth, and then noticed that the beads of light she was commanding were now moving towards me, but in a mesmerizing, hypnotic pattern. Slow, steady circles, swirls and coiling chains of light beads wound their way around me, and warmth, as well as a snug feeling of being protectively held, followed by a potent energy of calmness and just... I couldn't help myself anymore. I was safe in this new place I found for myself, and I had just the spot for it, right next to the Oasis. The Domain of Leaves... That sounds like the perfect name for this place.


I heard the fae again. "My name is Gala. I'm what you call an Empathy Fae. I'm gonna work with your friends to helo you relax from now on. That's okay, right?"


I felt myself nodding... But, why did it feel like I was dreaming even though it was just a state of hypnosis? Maybe that's how others will have to perceive it if I tell them. But why should I tell them about a place I can go to if they don't believe in doing that? Unless I'm wrong and everyone just has their own ideas of creativity, but I can live with that.


Gala drifted with me until we came to a clearing bathed in sunlight. She got me to lay down and go a little deeper... Then she brought me back up a little and woke me up halfway.... to which I see Aloe! And in her sea dragon form, but she's not coiling me this time but rather, sitting in her own coils, on my chest, haha.... Obviously she's smiling too, giving off that positive energy she always does, and always will....

"Haha... Bet you didn't know I have a thing for danmaku patterns, yeah?"

V.I.P Member
I clicked onto this thread thinking,..."The gift that keeps on giving."....herpes virus?

Staff member
V.I.P Member
So, the ability to visualize a therapy mascot is the gift?

tree said:
So, the ability to visualize a therapy mascot is the gift?

That's what I mean.

The gift of being able to visualize a therapy mascot
which allows people who have developed the
therapy mascot to engage in therapeutic stuff
for themselves.

tree said:
That's what I mean.

The gift of being able to visualize a therapy mascot
which allows people who have developed the
therapy mascot to engage in therapeutic stuff
for themselves.
Click to expand...

Although, people like me... See, I'm one of those "ultra rare" so-called group of individuals... In one of my previous behavioral hospital stays, I was tested by a specialist who worked there, again for my ASD. I'm all too familiar with how it worked, so it was a no brainer, only thing I got wrong was not knowing who Saqeagewea (I think that's how you spell it?? Lol) was (no idea why that was one of the questions).

Anyway... Long story short, after the test was over she determined that my personality type turned out to be INFJ-T; yep, just as I thought.

Getting back to the point, yes, ya'll here know I got some cool tricks I can do, but what would it take to convince you that part of my Awesomeness is the ability to work with certain types of energies; I can walk into a room where everybody is screaming their heads off over each other, take about three seconds to take the blow from the sudden chaotic/negative PK generated by all that intense emotion and breathe through for a short second, then somehow cause the entire house to suddenly burst into raucous laughter because I basically have the natural ability to literally kill negativity. 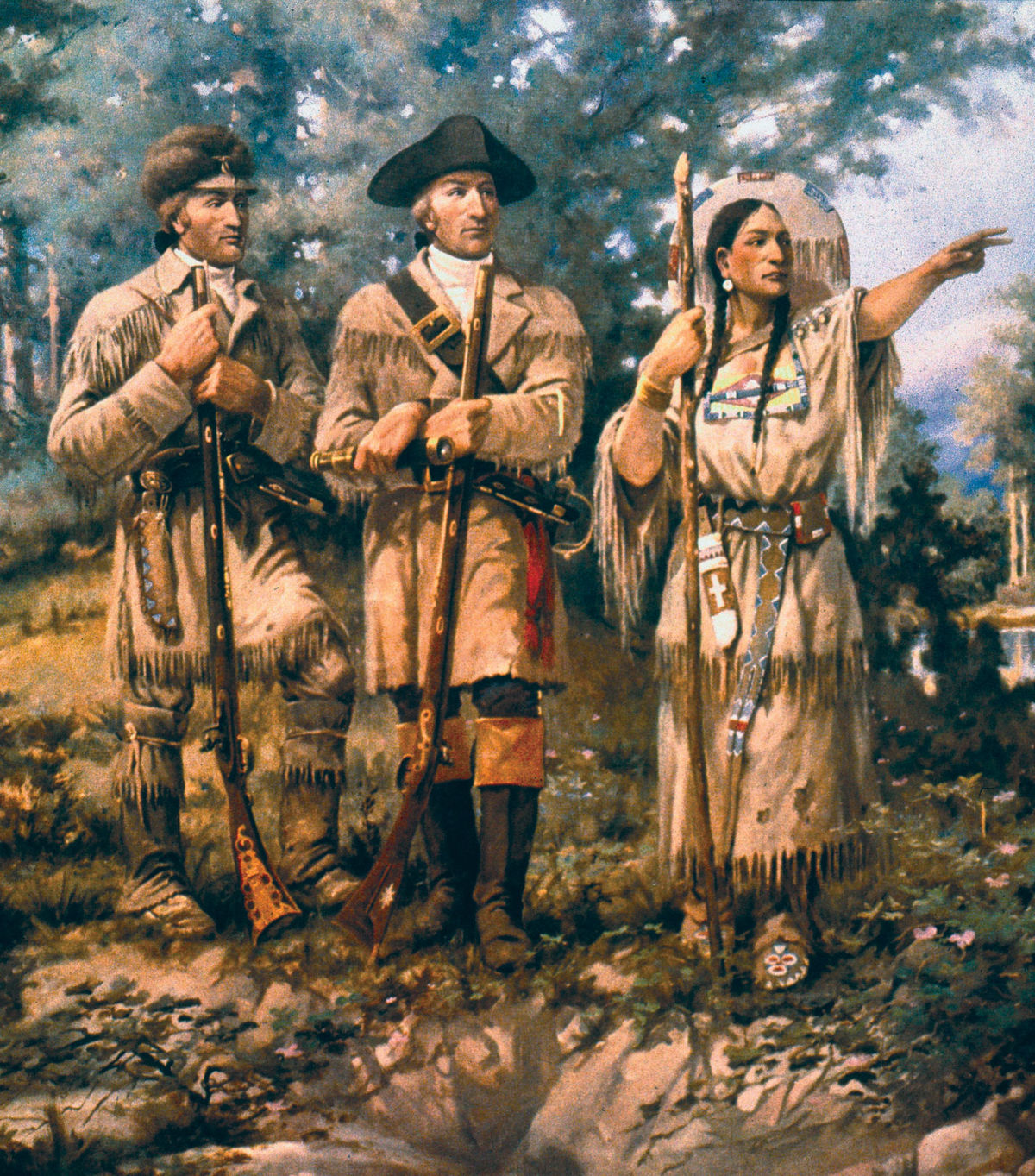 Sacagawea ( also spelled Sakakawea or Sacajawea; May c. 1788 – December 20, 1812 or April 9, 1884) was a Lemhi Shoshone woman who, in her teens, helped the Lewis and Clark Expedition in achieving their chartered mission objectives by exploring the Louisiana Territory. Sacagawea traveled with the expedition thousands of miles from North Dakota to the Pacific Ocean, helping to establish cultural contacts with Native American people and contributing to the expedition's knowledge of natural history in different regions.
You must log in or register to reply here.