I originally posted this on the writing forum I'm on in honour of the Feast of Saint James, (July 25) I'll edit it slightly to remove anything stating that today is his Feast Day.


Then came to him the mother of the sons of Zebedee with her sons, adoring and asking something of him.
Who said to her: What wilt thou? She saith to him: Say that these my two sons may sit, the one on thy right hand, and the other on thy left, in thy kingdom.
And Jesus answering, said: You know not what you ask. Can you drink the chalice that I shall drink? They say to him: We can.
He saith to them: My chalice indeed you shall drink; but to sit on my right or left hand, is not mine to give to you, but to them for whom it is prepared by my Father.
And the ten hearing it, were moved with indignation against the two brethren.
But Jesus called them to him, and said: You know that the princes of the Gentiles lord it over them; and they that are the greater, exercise power upon them.
It shall not be so among you: but whosoever will be the greater among you, let him be your minister:
And he that will be first among you, shall be your servant.
Even as the Son of man is not come to be ministered unto, but to minister, and to give his life a redemption for many. 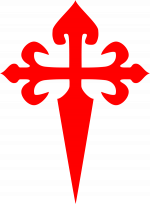 ​
July 25th is the Feast James the Greater, the son of Zebedee, this Saint to me, as he's the one who brought the Gospel to my ancestors, the Basque people. My dad’s side of the family ultimately traces its lineage back to a small village in the Basque country, the Basque are one of the many peoples that inhabit the Iberian peninsula. (perhaps the oldest people there, as well as and perhaps the Galicians) All of these people owe it to St. James the Greater for the Faith, hence why he, - known by us Spanish-speaker as Santiago - is so popular among the Hispanic people, or as I like to call us, La Raza de Santiago!

I originally wanted to type a commentary comparing Sts. James and John with Esau and Jacob, and contrast how Esau was a worldling, while St. James the Greater was a man in the world but not of it; but unfortunately it just came out as a bunch of rambling. It is interesting though, as is usually happens in the Bible, the younger brother got the better of the two, St. John got what he requested through his mother's intercession, to be at the Lord's side on Mount Calvary, he later went on to write his Gospel in which he revealed that Christ was the Word of God incarnate, he also wrote three Epistles and the Book of Revelations. St. John followed more of the contemplative life in contrast to his elder brother's active life, and he reaped the greater spiritual rewards of such a life.

Saint James the Greater however reaped great rewards and a great legacy as well, even though it didn't seemed as such at first. When St. James was Martyred, he had managed to convert only 5 people, but after his death, his legacy and heritage grew exponentially; his heritage now encompasses a great multitude of people across the globe, the Castilians, the Galicians, my Basque ancestors, the Catalans, the Indigenous peoples of Latin America, the Filipinos, Polynesians and many others. This is the legacy of man who trusts in God and never loses hope.